The only Gate Pub I know is in Studley Street, Sparkbrook.

The Gate Inn was on the end of Saltley High St at the junction of Washwood Heath Rd.

stars said:
Here are a few re-post of lost photos and a few new of the area. I just love that Vauxhall on the right The photo "Reginald Road Saltley 18th May 1962" shows a Standard car (I think). I believe it belonged to Mr. Guest who always had a "decent motor" (later he had a Ford Corsair - which I much admired). I lived opposite that block of houses. Further down there is an A55 van? where new houses were built on a bomb site that used to be our playground.

Fabulous photo's again. Thanks for taking the time & effort, to put them up.
W

Thank you for the wonderful photos of Reginald Road. I lived at number 38 until I got married in 1968. There were very few cars at the time of your photos. My dad had one later, an Anglia. I remember the Guests, think they had a daughter my age.
W

Great photo's thank you for re posting my husband lived at 14 Ralph Road. I also knew a lady in Tamworth who's mother ran the off licence in Reginald Road in the 40's/50's her son was killed in an air raid.
F

I'm sure I went to this school, was it very close to the tower blocks, high tower, queens tower etc. I lived in Howford Grove by the park and I remember the Tom Thumb Pub. I then went on to Bloomsbury St before going to Duddeston Manor school.
R

Duddeston Mill on the River Rea at Duddeston Mill Road was the Holte family's manorial cornmill. In 1540 the Crown Steward who was administering Birmingham manor complained that Birmingham people were using Duddeston Mill instead of Birmingham's own manorial Heath Mill. However, Edward Holte was able to prove that Birmingham's mills had often been inadequate and that his grinding Birmingham corn had been agreed with the previous lord of the manor, Edward de Birmingham. Trade increased and the mill was rebuilt c1570 with three pairs of stones. By 1744, in common with many local mills, it was being used more profitably for metal rolling, blade making and gun-barrel boring by James Farmer.

Gun-maker Samuel Galton, who lived nearby at Duddeston House, rebuilt the mill which continued to make gun barrels until 1888. The mill's weir caused problems in Deritend by holding up the raw sewage discharged from Birmingham a mile upstream. Disastrous floods in 1852 spread raw sewage throughout the lower town and prompted the weir's removal. The unreliability of a constant water supply led to the mill being converted to a steam-powered sawmill. After closure the site was bought by the Midland Railway standing as it did alongside the Birmingham-Derby line. 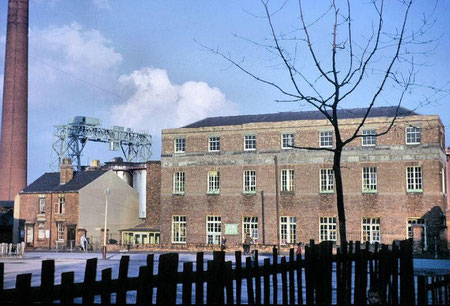 Duddeston House, Saltley gas works in the background 1954 photographed by Phyllis Nicklin - see Acknowledgements, Keith Berry. At this time it was St Anne's School
On the east side of Devon Street was the Galton family home. Known as Duddeston House, or later confusingly Duddeston Hall, it had been built in a neo-classical style in 1758. There were extensive grounds along the river with a lake covering 2 hectares which was stocked with exotic waterfowl. Samuel Galton Junior was a man of many interests. It was he who discovered that the seven colours of the spectrum are made up only of red, yellow and blue.

After the Galtons left in 1838 the house was used as a lunatic asylum until 1865. and with increasing urbanisation, from 1868 for the overflow of infants of St Matthew's School in Cato Street. As the population continued to increase, the building was altered the following year to accommodate a teacher's house and some 750 pupils, and was renamed St Anne's National School. However, Her Majesty's Inspectors reported poor buildings and poor education iin 1894. The Board of Education were still demanding improvements in 1912. As part of the wide-scale redevelopment of the area the school was closed and the building demolished in 1971 with the children transferring to the new St Matthews School on Duddeston Manor Road.

thanks stars. i enjoyed looking at the pics

I hope this will help -
Where the 4 cars are parked this is Long Acre.
Where the Van is parked is Walter Street with Thimble Mill Lane, running across, L H Newtons factory at the bottom right of picture, and the church is St Josephs.
B

wendyP said:
Thank you for the wonderful photos of Reginald Road. I lived at number 38 until I got married in 1968. There were very few cars at the time of your photos. My dad had one later, an Anglia. I remember the Guests, think they had a daughter my age.
Click to expand...

hi, do you remember a pakistani gentlemen who lived at number 34 Reginald road around the same time, i think his name is Mr Izzat Khan.

I wonder if anyone has any photos' of Raymond Road? My sister lived there in the '50s!! I think it was number 25!
B

Hi wendyP , do you remember the Hirst family No 41 and the Stych family No 40 Reginald road.

I'm afraid this is the nearest I can get you, the junction of Hartopp Road and Raymond Road in the 1940's after a flying visit by the luftwaffe.

Hey Phil, I would LOVE a copy of that photo as my parents house is just out of shot to the left and my father still talks about this raid. Any chance you can send me a decent sized copy somehow (not sure how you do that on here). Any help appreciated !

Staff member
Paul
If you save the photo it is 250 kb, so you can then print it at whatever size you want. Phil would have scanned it at the resolution shown here, so could not give you a better resolved photo. However I have used a photo program to give a slightly less blurred image(below), if you find that better.

Thanks but I was hoping Phil might have had the original print and could scan or re-scan at a higher resolution. I'd like to print it off for my elderly father to see which would require something significantly bigger but thanks again for trying.

Paul33 said:
Thanks but I was hoping Phil might have had the original print and could scan or re-scan at a higher resolution. I'd like to print it off for my elderly father to see which would require something significantly bigger but thanks again for trying.
Click to expand...

I'm sorry Paul, but as Mike says the photo you see is a direct copy of the 256 kb png image of the photo that I copied or scanned and I'm afraid as usual I cannot remember where I sourced it from originally though I will see if I can come up with that info.
P