Josie it is just over the road from Aston Villa grounds. I used to live round the corner in Holte road. Jean.
J

Let us know how you get on Josie?. Jean.
J

Staff member
This postcard is marked simply “Aston Church” - would it be the interior of St Peter & St Paul’s ? Very ornate interior. I notice a couple of hats perched on the choir pews to the left. Viv.

If you scroll down to "the interior" on this link it looks like St Peter and St Pauls to me https://ahistoryofbirminghamchurches.jimdo.com/aston-ss-peter-paul/aston-gallery/

Staff member
Many thanks Bewdley - some wonderful carvings on the pews in those interior photos. A church interior with lots of craftsmanship. Viv.

Very impressive church, lots of very fine craftsmanship to be seen. Presumably a pre-reformation foundation.
B

The tower and spire date from around the mid-15th century, I believe, the remainder of the church dating from the end of the 19th century when it was extensively rebuilt due to deterioration. There are some very old effigies, tombs and monuments in the church, some belonging to the Holte family of Aston Hall. My parents were married there (by Canon Cole, I believe) in 1939, and I was christened there just after the War.

It is believed that there has been a church on this site since Anglo-Saxon times. Around 40 years ago my father, who was an electrician, did some wiring for the new vicarage in the grounds of the church. When its foundations were being dug, hitherto-unknown graves were uncovered, and my dad told me that some of these graves were examined by Birmingham University archaeologists, and dated to possibly Anglo-Saxon times.

I keep meaning to re-visit, but somehow have never got round to it. The last time my wife and I looked, it was locked, and I presume it still is most of the time. However, regular services are still held.

Interesting details. Many ancient churches were subject to extensive rebuilding/alterations in the Victorian era. Some were sympathetic others not so.
B

The worst crime in my opinion of some Victorian 'restorers' of ancient churches was to cover beautiful mediaeval wall-paintings. It's only in recent years that many of these have been un-covered, particularly in East Anglian churches. Evidently, the Victorians thought the paintings to be 'frivolous'.....

Staff member
Interesting point G, I have often thought the same, Victorian vandalism. I understand that Lichfield cathedral was painted or whitewashed inside too, but the Victorians cleaned it all off.
B

The Puritans were also responsible for whitewashing the interior of many churches - they also thought that wall-paintings were a bit 'off'. 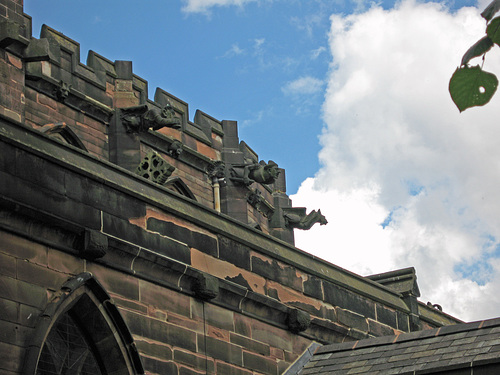 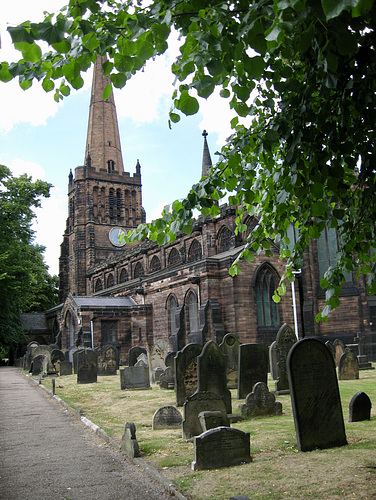 Staff member
Did Victoria and Albert visit the Church in 1858 (when they visited Aston Hall)? This engraving shows a much less ornate interior in this section of the church where th Holt family memorials were held.

The book I’ve chosen to write about this week is titled “SS. Peter and Paul, Aston: Burials 1790 – 1793”, and is located with the parish registers in the Heritage Research Area. It is a facsimile c…

Looking at post #36, seems to show a side chapel. It was probably for the Holte family and I have a feeling that beneath the square shaped tablet (on the left with two figures) could be a fireplace to keep them warm. Fireplaces in areas of churches for squires and landed gentry were common. The peasants had to freeze.
Memorial tablets are a common feature in many churches - usually a tribute to those who often put most money in the pot to keep it all going - but personally I detest them. More modern churches usually manage without them or they are kept to a minimum.

“... in a painted window of Aston Church, near Birmingham, is a coat-armorial of the Holts, baronets of Aston, containing the red hand, which is accounted for thus. Sir Thomas Holt, two hundred years ago, murdered his cook in a cellar, by running him through with. a spit; and he, though forgiven, and his descendants, were consequently obliged to assume the red hand in the family coat. The picture represents the hand minus a finger, and this is also accounted for. It was believed that the successive generations of the Holts got leave each to take away one finger from the hand, as a step towards the total abolition of the symbol of punishment from the family escutcheon.”

The Baron said:
JOHN, do you have an approx date for that picture? PLEASE! All my Mom & Dads familys were married at that church.
Click to expand...