Contrary to what books and TV documentaries say, I believe the Merlin engine used in Spitfires was not designed by Henry Royce with his mythical "walking-stick in the sand", but by Arthur Rowledge MBE, FRS, FRAS., who was Royce's Chief Assistant from 1921.
Rowledge worked for Napier before joining Wolseley at Adderley Park in Birmingham in 1905 (living in Dora Road, Small Heath), where he designed an advanced, innovative, V8 hydroplane engine and was instrumental in helping to design Wolseley sleeve valve motor car engines under development in 1913.
Rowledge returned to Napier in 1913 as Chief Designer, and designed the record breaking Napier Lion aero engine, but left that company in 1921 to join Rolls-Royce as Chief Assistant to Henry Royce.
His first task at Rolls-Royce was to redesign all their dated aero engines and he later designed and developed the racing aero engines for the Supermarine aircraft which won the Schneider Trophy races in 1929 and 1931.
Unfortunately, Rowledge has never received the recognition he so richly deserves.
Boomy.

"Told in the words of the last-surviving World War II veterans, with stunning contemporary and historical aerial footage, Spitfire explores how an extraordinary plane became an international icon." 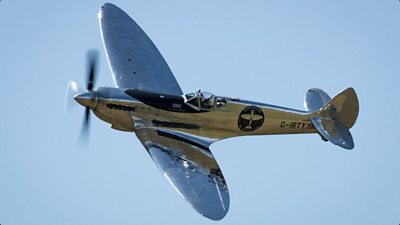 Steve Brooks and Matt Jones return back to Britain after a record 27,000-mile flight around the world.
www.bbc.co.uk

Staff member
This looks like a fascinating site, well worth a look: