I thought Vegumus = Night Soil = pure ratepayer profit, but https://warrr.org/473/1/THE_NEED_FO...ARISING_INFORMATION_FOR_LOCAL_AUTHORITIES.pdf says it was from organic waste from the markets. Interesting that the vehicles were charged from the electricity produced from burning the waste into steam to drive turbines and fill capacitors which seems very "green" for the time.

That looks like an interesting report, Aidan. I might even read it some time! A quick browse appears to confirm that Birmingham was indeed "greener" in the early 20th century. But as has been pointed out earlier on this thread, there was much less waste in those days, and its composition was quite different.

As Lloyd and others have shown, refuse disposal and recycling are big subjects and require careful consideration and planning in this "throwaway" age. Incineration is becoming common, but the consequent generation of "greenhouse" gases must be taken into account. On the other hand, the landfill option is becoming more and more expensive. Some kind of energy generation from waste materials must be beneficial, but the economics of it all are very complex. The old adage "reduce, re-use, recycle" still makes a lot of sense to me.

In my home town, every household has two big wheelie bins, one for garbage and one for recyclables. These are emptied fortnightly by driver-only vehicles. I'm not sure exactly how the recyclables are processed, but anecdotal evidence suggests that much of the stuff ends up in landfill anyway. An anomaly is that "green" (garden) waste is not permitted in either bin, so must be carted to the tip by the householder (difficult for those like me who don't own a car), or broken up and composted (impossible for the woodier material). Garden fires are not allowed because of the bushfire risk, though this is much lower in Tasmania than on the "mainland".
A

I remember these electrics well so unlike the noisy vehicles used today.

Here's my memory of them somewhere in Alum Rock.
https://www.flickr.com/photos/saltleyman/4746904252/

Staff member
Think this should go on here, it's an interesting vehicle. I'm assuming it's a dustcart as it looks like the one in the link above. Viv.

Yes it is Viv, the last survivor of Birmingham's large fleet of battery electric dustcarts, the rubbish was burnt in boilers that fed the steam-driven generators for recharging them at night.
R

Well I suppose if you burnt the lot and used the energy produced; that would be a form of recycling except for the problem with greenhouse gasses today. A lot of the waste would have already been burnt though in coal fireplaces in those days. Not big enough for the separated recycling around here now but what an elegant design. Similar to the milk delivery vehicles of another thread. I remember them well.

It is as you thought a dust cart.as it goes a friend of mine well in his late 70s used to drive the said vechicle.
it is in dollman st b,ham sort of museum,it was renovated for a lord mayors show so i,m lead to believe,
a few years ago..regards dereklcg.
R

Staff member
thats a cracking pic ragga..ive not seen it before and no clues really apart from half a sign showing above the shop on the left...

I was watching a programme on BBC 4 about the ways we deal with our waste, a few days ago. Birmingham has a really efficient method of delaing with its refuse and reference has already been made about it in previous postings. Ferrous waste was removed by using magnets, paper was removed by sorting and the rest was burned, the resulting ash was used as a a buliding material and the heat fron the "destructors" ie the furnaces was used to produce electricity to power the battery powered refuse lorries, this was considered to be an ideal way of treating waste material.
One small problem with using battery powered refuse lorries was that as the batteries became exhausted the load got heavier unlike a milk float were the opposiite occurs, never the less the city was a paragon of using waste material for good use and today would have been seen as a paragon of carbon nutrality.

Re the photo of the refuse vehicle at #65. it looks a lot like the back entrance of Upper Highgate Girls School to me in Upper Highate Street c1960.

It was reported that during the year ended March 31st 1937, that the percentage of refuse collected by Birmingham Corporation electric vehicles (as opposed to non-electric vehicles) was 87.1. The collection cost per 1000 premises was £536 3s, against £727 12s per 1000 premises for the year 1922, when only 25.37% was collected by electric vehicles. The Department had the largest fleet, in 1937, of electric vehicles in any municipality in the country, 145 of these vehicles being in use. A number of petrol vehicles were employed in collecting refuse from certain areas situated on the outskirts of the city. The Birmingham Corporation Salvage Department was responsible for the removal and disposal of house refuse, the collection and disposal of certain trade refuse, the cleansing of markets and slaughterhouses, and the emptying of cesspools. Photographs of an electric and two petrol refuse collection vehicles in 1937 are attached. Dave.

While on the subject of refuse collection, as a boy growing up in Erdington, we called the dustmen, "Miskin" men.
Anyone got any idea where that came from.?

I've seen an explanation on the forum somewhere but can't find it at the moment ... I always called them dustbins ...
Here's some magic ones in a forum pic ...

oldMohawk said:
Another forum pic I liked when I first saw it, a 'clutch' of 1960's girls are having a laugh, I thought clutches were only in cars. Then there are 'miskins' and I think I can see two of them in the pic, but I never knew them as miskins. Anyway, the washing is drying nicely, and it's a happy pic.... 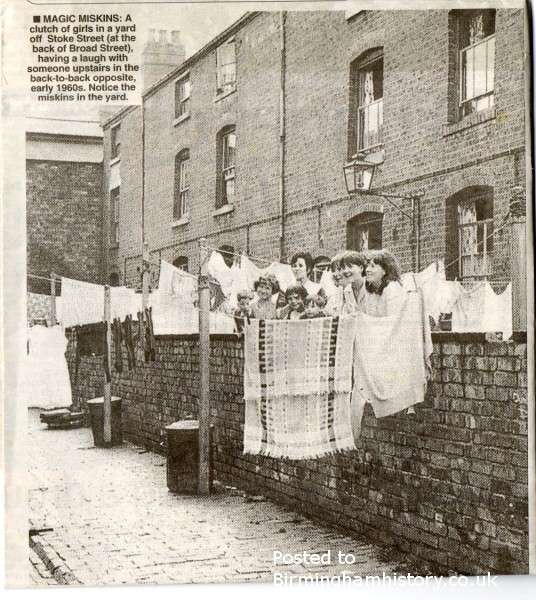 I should imagine it as something to do with the ash that was removed from the fire grate there was always a lot and it was very dusty.

Austin K2 said:
While on the subject of refuse collection, as a boy growing up in Erdington, we called the dustmen, "Miskin" men.
Anyone got any idea where that came from.?
Click to expand...

My dad always called the dustbin the miskin. I think I read an article by Carl Chinn that miskin was used by Shakespeare so it is a very old description.
H

I saw this today it is one of those things that you cannot walk away without taking a photo, so my Question is "Just how many men does it take to empty a drain"
the answer is Eight if you include the driver https://www.flickr.com/photos/dofartshavelumps/22089594264/in/dateposted/

Staff member
No date or location for this one. Maybe 1940s ? Viv.

You do know that the bin men are on strike in Birmingham right now. Uncollected rubbish for the past 5 weeks or more.