I know this is not a very nice subject but last week we were in The New Inn where I met a lovely lady in her eighties and we got onto the above subject .{Don't quite remember how?}. She asked if anyone remembered the above. She said that her mom every Friday gave all the children a tablet to make them go to the loo. I can't remember my mom doing this but I can remember there was always a tot with Beauchamps pills in the kitchen drawer. Jean.

Evey day at the two 'Visual Impaired schools' that I attended they gave us a table spoon of Cod liver Oil after lunch and we were asked if we had bowl movements, also I believe it was also done at the two 'Open Air Schools' where my sister went this was in the 1940's to 1960's.
S

We were given syrup of figs - I think mothers were obsessed with bowel movements in those days!

Come to think of it I had cod liver oil capsules but that was to ward off colds [so I thought]. Jean.
D

I remember as a boy being sent by my parents to the local chemist to get a purgative which they called "Settler's Powders".

The chemist wouldn't sell it to me and insisted that an adult came for it. He said they were too dangerous.

My father went and got it. When I saw the packet, which was white with red print on it, it wasn't "Settlers" it was something like "Seidlitz".

Apparently they were highly effective, to say the least. They came in a paper wrapper, rather like Beecham's Powders, and the instructions advised you to not leave the house for an hour after taking one!
B

My mother was obsessed with "being regular". It was California Syrup of Figs daily (quite tasty), and Beechams Pills or Bile Beans if things needed a bit of a boost. Epsom Salts were taken as a last resort!

My dad called it "Opening Medicine". Like most of his generation he thought that constipation was the worst thing that could happen to you.
B

I was just going to send another post, but must rush....

Staff member
The cod liver oil would have been to keep you healthy, not as a purgative. The Seidlitz powders were very mild purgatives, while syrup of figs was stronger. This used to contain senna (which you can also get under that name), though I think you can now get "Syrup of figs" without senna in it . Whether it still works I don't know. The most unpleasant cure was caster oil. this could give stomach cramps and (though i have no personal knowledge ) "explosive diarrhea". Laxative chocolate contains phenolphthalein. but you have to be careful as to how much you take, as the action can be violent. Basically purgatives act bynirritating the bowel, causing it to expel the contents ( a bit like making people drink salt water or mustard water to make them sick)
B

Quite right Mike re the bit about bowel irritation and something that I believe current medics do not encourage. Interestingly when I used to do metallurgical analysis at Darcast, Smethwick we used phenolphthalein as an indicator for the analysis of phophorous,in cast iron, it was used during the final titration and when mixed with alcohol gave a most beautiful deep pink cerise? colour. We never used it for anything else!!
B

l had one of those mothers who thought syrup of figs on a fridaynight went alone with bath night, shampoo and a good going over with the durback comb,...l guess she thought we had to be clean on the inside as well as outside.....thank goodness we only had one bath a week....Many years ago l remember after a long 2 days travelling by car it was obviouse l needed a little help in that department so i bought some chocolate EX-LAX...never read the instructions just ate the whole thing......well l'll never do that again....you can imagine the end result.......Brenda

Staff member
Bill & Brenda
Conerning phenolthphalein. I have told this story before, but i think on another forum. Around the early 1970s Cadbury's made a special chocolate selection of handmade chocolates (called royal Household) to be given to the Royal family and the directors at Christmas . They were handmade, unlike the rest of the products of the factory, and, because they were not made in the normal factory, their manufacture was the responsibility of the experimental department under a very precise confectioner who spoke with a correct upper class english accent , but who actually was Swiss. These were very special, and the only product made by the company which contained alcohol . However one year, although they were kept in a locked cupboard, they were going missing at a great rate. The confectioner (who may still be alive, so I will not name) made a special batch , identical to normal, but with added phenolphthalein, and locked them awya as usual.

Every Friday evening my brother and I were given a large spoonful of liquid paraffin, as we didn't have to go to school the following day. It didn't taste that bad and was much cheaper than Syrup of Figs, which I quite liked!

Somewhat more unpleasant was Epsom salts (magnesium sulphate), which had quite a bitter taste. My mother used that whenever she ran out of liquid paraffin!

As a vitamin supplement she used Multivite - tiny egg-shaped chewable table with a chocolate flavoured shell. Those were quite nice too!

On a slightly different tack, when no one was about I would take a swig from a bottle of malt vinegar - I loved the taste of that. It was the next best taste to baby orange juice!

EDIT: Of course, the other great taste was Andrews Liver Salts - a large spoonful in a glass of water swallowed whilst it was still fizzing. Lovely!

I think this was mentioned before.............. RHEI was the purging medicine used in Sir Josiah Mason Orphanage.

It was foul stuff but by golly it worked!! Every morning you were asked if you had "had your bowels open?" even if replied YES you still had a spoonful of the stuff (

My Mom used to boil senna pods in water and drink the tea when she felt it was time for her babies to arrive. Swore it worked every time (and she had six). Anne

California syrup of figs was my dad's remedy for the dreaded constipation, and Haliborange tablets for vitamin C (to stop you catching colds!).
I once found a bar of chocolate in a kitchen drawer, only two pieces gone. Of course I took it and scoffed the lot. I think I nearly turned myself inside out that evening!

Andrews Liver Salts was another daily dose, and when added to orange squash it made a nice fizzy pop! 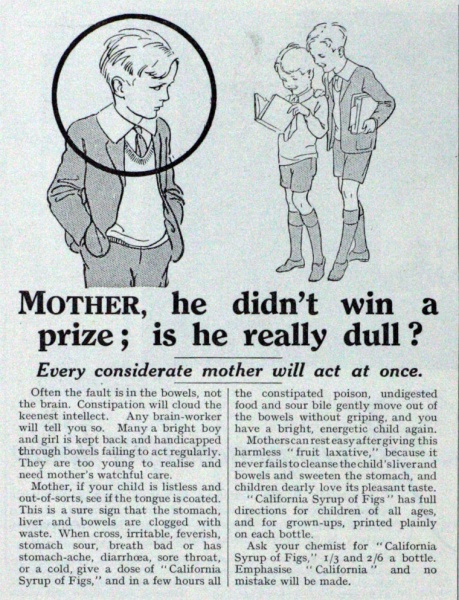 Thanks for posting that article Lloyd. I too loved Andrews liver salts and used to raid the tin when no one was around. The bubbles fixed so high they went in my eyes. They make a similar mix with malt in Gozo and take it for colds and it is lovely but I don't think it works?. Jean.
P

does any body remember scotts emulsion thick white liquid that you were given a big spoonful off not a bad taste but what was it for?
phil
B

Phil, l remember scotts emulsion l had a dose of it everyday l think.....it came in a brown bottle and was very thick as you say it was'nt to bad.....my brother always had codliver and malt....l could'nt stand the stuff it looked good but tasted to fishy for me......they were both vitamin supplements....Brenda

And all the information is here:-