Good news. The Gas Retort, having been bought by Ashtenne & renovated has now been removed from English Heritage's At Risk Register. The owners of this landmark building are in negotiations with a company considering setting up a gym & creche.
R

Doing some work for the architects restoring Gas Retort House etc, and was wondering if anyone worked there and can remember what it was like?

Would be nice to have some stories to add to the pictures!!

Nice to know the building is being looked after at last.

As it is the state established church that is involved it could well be a question of "all gas and gaiters".

I left Gas Street Basin at Gas Street when I noticed this new church, St Luke's Gas Street. At Retort House. It opened in 2016. The building is Grade II* listed dating to the 1820s. 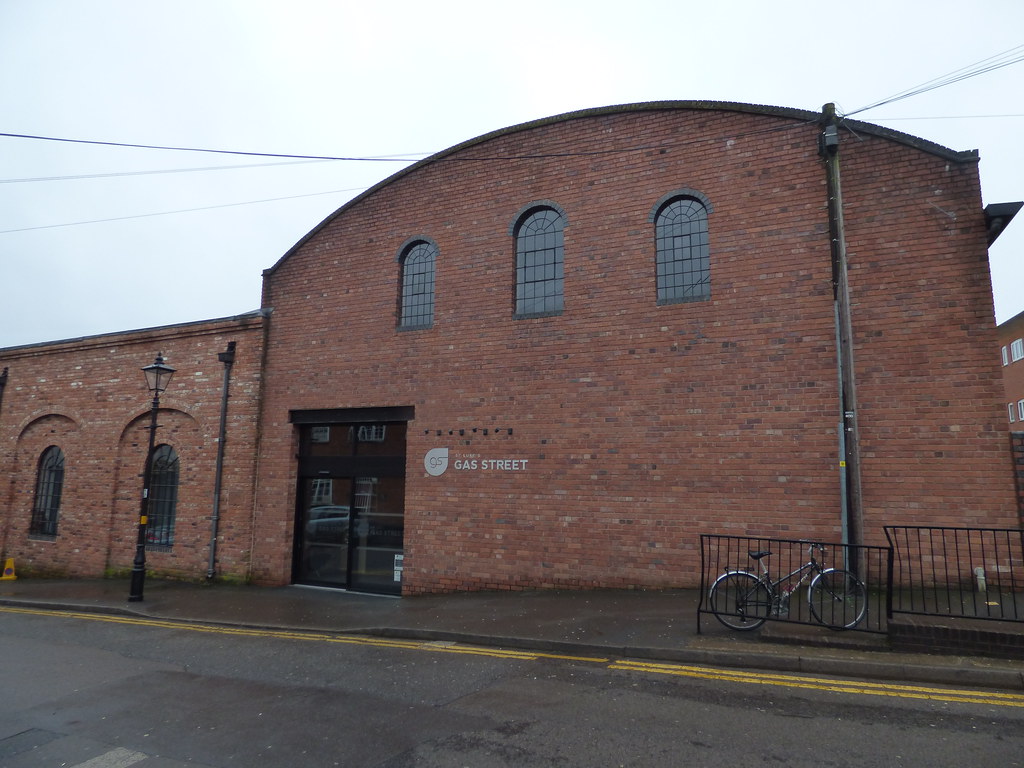 One image of Retort House 39 Gas Street in the 50's when it was still surrounded by like buildings and another slighly later close up of the building.

Staff member
The bit I know about the retort house is:

The building was bought by a developer (cannot remember when) who, during the course of development noticed the unusual roof trusses. Cast iron lattice design. They contacted the conservation officer who realised that this may have been the original gas works in Gas Street that gave the street its name.

The roof was designed as a fireproof structure, with a brick-built gas retort in the centre. Subsequent excavations revealed rail track for moving coal around, the footprint of the retort and the general layout of the site as a gas works. I recall there were a couple of gas holders on the site too.

I am very pleased that an alternative reuse has been found for this historic building because in my opinion the conservation office did place some quite restrictive limitations on how the site could be reused.

ellbrown said:
I left Gas Street Basin at Gas Street when I noticed this new church, St Luke's Gas Street. At Retort House. It opened in 2016. The building is Grade II* listed dating to the 1820s.

Yes I did know about that, as per my post #3, I think it's an Evangelical church - they do the Alpha Course, appeals more to younger people - this is the website https://www.gasstreet.org/

It does have an evangelical ethos and given the area it is located was intended to attract younger people. My post 5# does mention that it is part of the C of E It also is joined with St. Luke's Great Colmore Street.

The curate before our present one moved to this St Luke's and the description of the church fits with the post she was taking up.

An aerial view dated 1933 of the Gas Street area with the curved roof of the Gas Retort clearly visible.

from 'britainfromabove'
A recent view of the the same area with the Gas Retort visible to the side of the Jurys building.

Gas Works and Electricity Power Stations probably require a separate sub heading such is the depth of the history of each service.

The Gas Street retort house was the first undertaking in Birmingham to make gas. I visited the site in the mid 1990's when restoration was first considered. There were still bits of narrow gauge track in the site.
D

I visited the Gas Street Church in the former Gas Retort House with a party from the Friends of the Centre for West Midlands History at Birmingham University yesterday. The building dating from 1818 onwards is the oldest surviving gas works building known and was undiscovered until 1992. Basically we were looking around a number of empty rooms but what was interesting in the Retort House itself which was L shaped was to look at the roof structure which was identified as early fire proofing which was a factor in the award of grade 2* listing for the building. The roof trusses were cast iron bolted together with wrought iron tie bars to provide the lateral strength. The slates were then fixed with copper wire. The Retort House was open sided on the south side so the roof was supported on free standing cast iron columns, the brick wall being a later addition.

We started the visit with a talk by Toni Demidovich who was a conservation officer of Birmingham City Council at the time. In 1992 the leases on the property expired and the plan was to demolish all the industrial buildings in that block and build residential property. However the planning officers dealing with the planning application spotted some interesting aspects of the building which they referred to their conservation colleagues. Birmingham City Council took a bold move in placing a six month preservation order on the building pending the assessment for listing. This was a bold move as the City Council would have been liable for compensation if the listing application failed. As investigation proceeded it became clear that the building was a retort house and then realisation dawned that it was a gas producing retort house. An obvious clue was that it was in Gas Street!

The room in which Toni gave her talk was, she said, the Coal Store and looked out on the former canal basin which was served from under the bridge in Gas Street from the Worcester side of the Gas Street Bar. That room had wooden ceiling trusses and the roof would have been ventilated because coal for gas production needs to be kept dry and it also gives off combustible gases which needs to be ventilated.

Also in the floor were narrow gauge railway tracks for the movement of tubs of coal and the coke and other products which result from gas production.

We then had a conducted tour of the church premises including the offices upstairs. The church was founded in 2016 by a husband and wife team, Tim and Rachel Hughes, who came from Holy Trinity Church, Brompton London, known as HTB, a very evangelical church known for 'planting churches' in large population areas. With permission from the Bishop of Birmingham they started from the Winson Green vicarage looking for property in Birmingham that they could use. They say they found the property on Right Move. I know the property was on the internet because I had downloaded the estate agent's particulars purely out of interest some years before that.

Having found the property they then needed to start work. In Church of England terms the property was in the parish of St Luke's Edgbaston. St Luke's church is now a modern church in Great Colmore Street on the housing estate between Bristol Street and Bath Row. Members of this forum will no doubt remember the original St Luke's on Bristol Street just before the Middle Ring Road which was demolished a couple of years ago. The Gas Street Church which also has the name St Luke's is technically a chapel of St Luke's Great Colmore Street and Tim Hughes is listed as Priest in Charge for the whole parish. I did ask if the congregations at the two churches were different and the answer was that St Luke's had the Communion and Liturgy services and Gas Street has more informal 'gatherings' of which there were 3 on Sundays with 300 people present at each. For those of us brought up in the more 'middle of the road' Church of England may be a little surprised at the 'Happi-Clappi' evangelical wing of the CofE but it does get the people into church.

Final comment. I have heard that Gas Street church will be featured on Songs of Praise on Easter Sunday
V

I have just seen a trailer on BBC TV for Songs of Praise today (Easter Sunday) coming from the centre of Birmingham so I expect some scenes from the Gas Street Church in the Retort House.. This will be shown after the 1 o'clock news.
You must log in or register to reply here.
Share:
Facebook Reddit Pinterest Tumblr WhatsApp Email Share Link
Top