For interest a closer view of the aircraft.

Neville, what year did they move from old to new ? I seem to think it was the old when we first flew in the 70's. Eric
W

Pedrocut said:
Looking on the Plane Finder App there seems to be just three arrivals at Elmdon today. In the 3D app you can follow the aircraft over earth view as it lands. Here are the screen shots of the early arrival from Dublin.
Click to expand...

Pedrocut your post brought back happy memories to me , my mother used to fly to Ireland every year during the 70/80's . The one memory that sticks with me was when she flew from Elmdon it always seemed to be the same flight number EI265 that took her from here to Dublin , then it was on to Limerick . We used to make a day of it because it was always during the school Summer holidays the kids loved watching the planes coming and going and I used to have a pint or two while we were there, then all on the bus to come back to Brum .
N

cookie273uk said:
Neville, what year did they move from old to new ? I seem to think it was the old when we first flew in the 70's. Eric
Click to expand...

Hi everyone, new to this site and a lady spotter too!

Started at old terminal, up the spiral staircases or in the snack bar overlooking the apron if it was raining. Could spend all day there during school holidays. Remember flight announcements containing aircraft type as well as usual info. The outside domestic luggage pick up that resembled a bus shelter. Then, when Wardair began flights to Canada, the 747 parked just outside the large glass windows. Don't think they had a special assistance vehicle suitable, as most of the elderly passengers negotiated the many steps supported by helpful airport staff. Heard that Doug Ellis used to man the check-in desk for his package holidays, never saw him though.

Then the new terminal opened, including a new viewing area with live ATC transmissions. Last time I used it, entrance fee was 30p. Outdoor area at bottom of long-stay carpark had picnic benches. When Eurohub was built got great close-ups of aircraft at gates 1-5? Many pilots waved from here or when taxiing out to Rwy33. Sadly, extortionate parking fees and increased security limited spotting choices. Did see Concorde; didn't know it was due and just wanted a few hours of spotting. At carpark barrier, policeman observed "don't know what the fuss is about, it's only an aeroplane!" My reply was "but it's a very special aircraft, we may not see anything like it again". He agreed and let me in.

Moving on, Sheldon Country Park is now my chosen spotting location. Living in Sutton Coldfield, it's easier to get train as parking's a pain. Don't go during school holidays though. Last year, met very interesting guy who'd worked at airport. Haven't been this year yet, due to lockdown but still seen some unusual aircraft. RAF C-17 has been frequent visitor and a Mustang (American version of Spitfire). Thank goodness we now have FlightRadar24.

Currently writing blog for a spotters site and articles for another. Had honour of seeing AN-225 over my house Sunday 2nd August. Now waiting for Emirates A380 to return to BHX. Starting again in September with B777 4xweek. Must be patient for a bit longer....

Firstly thanks for the add to this wonderful forum.
Following on from the Austin Aero works thread we thought you may like to watch the attached video about the Elmdon Airport Terminal.
Both Gary and myself have an interest in the 1940s time period, with Gary also being a big band vocalist.
We put this video together to show a little of the history and published it to coincide with the anniversary of the opening.

Travel back in time with Gary and enjoy the terminal in all it's magnificence.

Really enjoyed that video. Lots of memories flooding back.
L

Glad you enjoyed it - thanks for taking the time to watch

Brilliant film, and my first flight was taken from there to Dublin in a Dakota DC3 of Aer Lings with my uncle in 1952. My father had died in the February of that year whilst I was still at school, so this was a treat for me. Difficult to remember much detail now and it was all over so quickly, both the flight and the three week holiday in Enniskerry, Co. Wicklow, but butter was still on ration in the UK and I remember bring back two packs of Irish butter. Thanks for the hazy memories, Gary & Lucy.

“Amid grey clouds and rain in west London, British Airways' last two Heathrow-based Boeing 747s have made their final flights, after the airline brought forward their retirement because of the downturn in air travel during the coronavirus pandemic.” 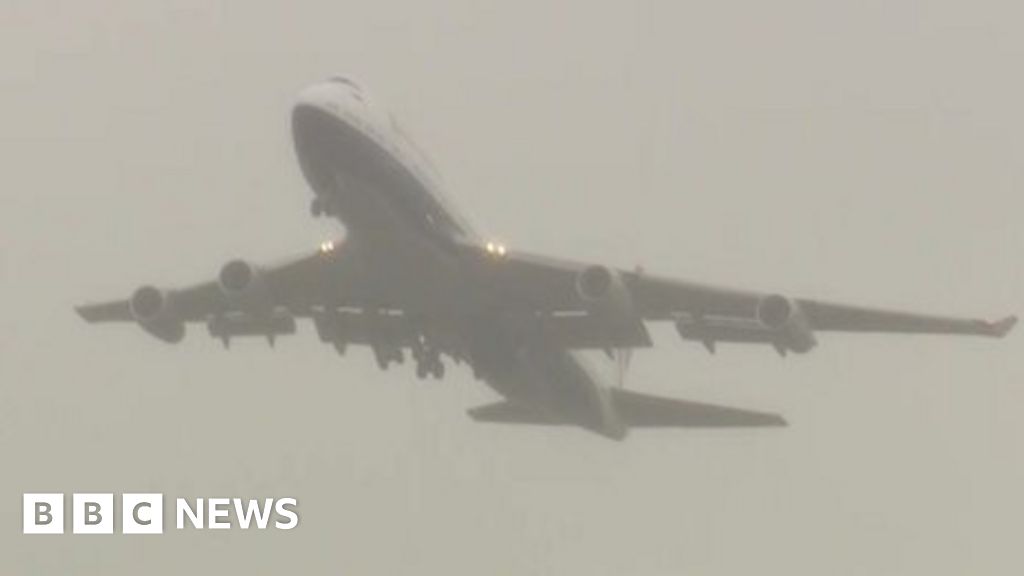 “Amid grey clouds and rain in west London, British Airways' last two Heathrow-based Boeing 747s have made their final flights, after the airline brought forward their retirement because of the downturn in air travel during the coronavirus pandemic.”

British Airways' last two Heathrow-based Boeing 747 planes have departed from the airport on their final flight.
www.bbc.co.uk
Click to expand...

One has gone to Kemble and one to the Welsh aeroplane scrapyard. I would have loved to have been there for their side by side take off and loop and low flight over LHR.
Bob
B

Bob Davis said:
One has gone to Kemble and one to the Welsh aeroplane scrapyard. I would have loved to have been there for their side by side take off and loop and low flight over LHR.
Bob
Click to expand...

The weather at Heathrow this morning was awful. It was never intended for them to take off side by side, but in opposite directions from the same runway was suggested at one point. There is a video on Youtube of the last one taking off but the weather prevented a clear picture. The last one is now at Kemble airport and is not to be scrapped, it will be put on display.
J

Watched BA 747s departure on BBC News this morning (got fed up waiting for Sky to do it!). They actually took off in tandem, due to the poor weather conditions. Saw the one land at Kemble on FR24. The scrapyard at St Athan was featured on recent tv series. Very interesting.

Had spotting day at BHX a few weeks ago, on the last really hot day we had. Saw C-17. Landed on Runway 33, had to taxi onto terminal apron, cross runway, to get to general aviation parking. Awesome sight!

May be cheeky here, but if you are interested in spotting, why not look at theplanespotterscommunity.co.uk

Excellent site giving opportunity to electronically record sightings, lots of great photos/videos and an amazing blog (that's because I write it!!)

Reminds me of my first flight on a 747 in 1973 ... half a life time ago! I was in a long queue of 355 passengers boarding a JAL flight going to Tokyo via Anchorage Alaska. We had one of the engines fail over the North Pole but the other three kept us going.

On another 747 flight to Boston USA in 1984 I was upstairs in the 'bubble' and was allowed a visit to the flightdeck as we flew over the Atlantic.

oldMohawk said:
My first long haul flight started from Elmdon in 1973 ... I was going to Japan.
We flew to Heathrow where we boarded a Japan Airlines 747 jet which were quite new in the early 1970s. A japanese holiday company had booked most seats with only a few british people aboard. In those days flights to Japan went over the North Pole with a stop half way in Alaska. We settled down for the long flight over the Arctic when suddenly there was a very loud explosion and out of the windows we could see one of the engines with bits missing off it. The cabin crew and japanese passengers looked worried so I got an airline map out and could see that we were 2000 miles from the nearest airbase and looked at the ice below and thought what now? We flew on at reduced speed to Anchorage where we saw blue flashing lights of waiting ambulances and fire engines as we circled above the airfield. After a slightly bumpy landing we had to stay in Anchorage overnight waiting for a replacement aircraft from Tokyo.
Click to expand...

I never flew on a 747 although I would have liked the experience. Largest plane I ever flew on was a DC-10 British Caledonian flight from Gatwick to JFK

David, I have never flown on a B747 either but have flown on a B707 (post#661) more than once with my late wife to Malta from Birmingham in the early 80's with Air Malta. Eric

We have flown on 747 several times but we did fly last year on 787 from Denver Colorado to Heathrow now that is a great craft. Got First class treatment all the way. one of the many many advantages of marrying a Stew 57 years ago!!

National Airlines - not National the car rental company - is adding three 747s to its freighter fleet at a time when shippers are desperate to find airlift.

Seems overall freight capacity has fallen due to reduced demand for passenger flights. So maybe not all 747s are destined for the scrap yard yet (fingers crossed) A recent headline also predicted future capacity for .. World vaccine delivery 'will need 8,000 jumbo jets'.
D

We do not know if the vaccine would require refrigeration although if the hold was not heated this would not be a problem in the air but would be with the ground handling. I think that figure of 8,000 must assdume that the vaccine was produced all in one big batch which is not going to happen.
You must log in or register to reply here.
Share:
Facebook Reddit Pinterest Tumblr WhatsApp Email Share Link
Top