jardene said:
My husband is extremely deaf but thanks to modern science can switch his hearing aids to answer the phone. I always know when a scammer is on the line as he does his "you will have to speak up" or "what did you say" routine. He drives them up the wall and can keep it up for ages - they always end up hanging up on him! He calls it getting his own back!
Click to expand...

I always pretend to be stupid.

Nico said:
I always pretend to be stupid.
Click to expand...

i DONT have to pretend

Spargone said:
As the Royal Mail is under contract to deliver the 'junk' this postman isn't doing his job properly. If the Royal Mail doesn't deliver 'junk' it will need fewer people to do the work and it will need to charge more for the mail that we want to send.
Click to expand...

In France they put no publicity on their letter boxes, which works.

Mum used to blow a referee's whistle down the phone.
I ask then where they got the number, and that it is an ex directory number, and they say say they can't say and I say well I can't say then either and hang up, or I say I can't understand their accent over and over, or I invent an accent of my own.
When I was at work we had about 10 phones with a different extension number the last digit being different, mine was the only one that accepted external calls, the same caller somehow rang every phone in the office, which I answered, they did not realise it was me every time, I alerted the exchanged and they called the police.

Yet another one today. You can tell you've been auto-dialled when there's a two or three second delay before someone responds to your "Hello?". Then a foreign femaile voice (but not Greek) asks "Are you siiting comfortably?". I felt like responded "What's this? Listen with Mother?", but I just said "sorry I don't understand" and hung up. Of course, she never got back to me, so I'm pleased about that. Let's see what tomorrow brings.....................

My telephone started ringing this morning but after 5 rings it spluttered out halfway through a ring.
I later had a look at the call log and could see my BT8500 had blocked the call coming from a 0039 ...... number.


If you have been contacted by 0660, you ought to be extremely cautious about answering their calls. The caller ID has almost certainly been spoofed with an officially reserved number, either as part of an elaborate prank or worse yet, a malicious scam. Be vigilant and don't let fraudsters con you out of your money. Don't accept any calls or text messages from 0660!.

We kept my partners late mum's phone live as it was handy when we cleared the house. The amount of spoof calls she said she got and then we continued to get, in foreign accents (to her). Even when we told them she had passed away, most of them just carried on. Their command of French was abysmal, if they went off script, like here, they were clueless so I had a go several times at them,. If my partner picked it up, she would just say she is no longer living here and hang up.
I even got an email phishing scam when I was there from whom I thought was a friend over there, who had been ill. I misread it in the cellar light, I reacted too fast and replied thinking the bad French and unusual language was down to her illness. As soon as I pressed the send button I twigged. I got another one from the same false person when we got back to the UK and I reported it. I think if you keep calm and just wait a bit and if they try to rush you, don't be rushed.

Just had 2 more phone scams 2 days on the trot. Claiming the provider could not reach us and that the internet will stop working in 24 hours. A very well spoken lady in a badly edited robot message, telling you to press various buttons to get help. First number was from Scotland allegedly, second from Lincoln.
E

They use computer programs to fake phone numbers Nico so the calls are more likely to be from Nigeria or Taiwan or some other distant place than from Scotland or Lincoln.
The advice is to never press any of the buttons asked for, just ring off.

Staff member
A very interesting short clip on how scammers work and the fight back.

Yesterday I was working from home and had two very interesting phone calls, the first was from 'Dave' of Talk Talk who wanted to talk to me about the virus that he had discovered on my computer, (at that time I was paying a lot of money to a computer expert to find drivers for my printer and clean up my messing up of downloading updates for Windows 10 and he had just announced the computer was virus free). I asked 'Dave' if he would like to talk to my computer engineer and would you 'adam and eve' it, he put the phone down on me. Later 'Colin' rang from 'Call Blockers' offering to put a programme on my telephone that would block all unwanted calls, he was a persistent little chap and gabbled on and on, but what surprised me was how much detail he had on me, after a while I was able to get a word or two in and I told him to go away. Both had voices that originated from the Indian sub continent, but what I realised was that they sounded so genuine and helpful, I knew had people not cautious to check them out could easily be taken in. 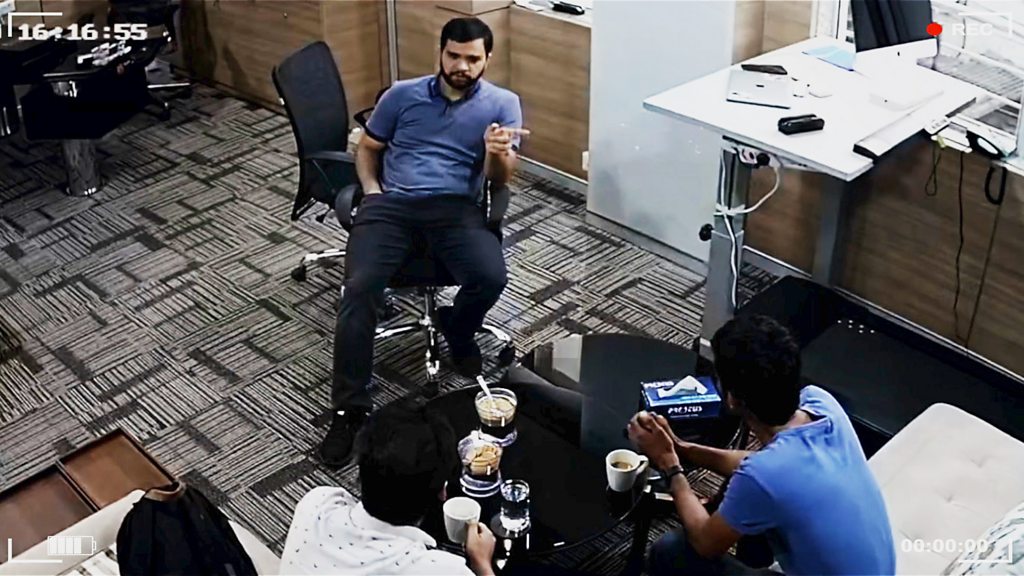 BBC Panorama broadcast footage from inside a scam call centre - now its owner is in police custody.

Scammers do have the gift of the 'gab' (there's another one for the sayings thread maybe).
A recent tv news programme reported that a woman had been scammed out of a five figure sum of money. She said the caller was very plausible and even phoned her to wish her ' a merry Christmas!'
One fact of life - and here is maybe another for the sayings thread - and that is there is 'no such thing as a free lunch'
Another is ' if it sounds too good to be true, it usually is!'
B

If, when I answer a call on my land line, there is silence on the line, I instantly hang up then have that call blocked by BT Call Protect by dialling 1572. This doesn't totally eliminate all scam calls obviously, but it helps.

Around Christmas we had a series of scam calls using different numbers but with the same dialling code, which I traced via Who Called Me - they all originated from somewhere in Northern Scotland according to the dialling code. I did once try calling one of the numbers back - after dialling 141 - and a recorded message told me that the number is unobtainable.

Received a call from 05142 865413 yesterday regarding a suspicious £599 visa txn and that if we didn't recognise the txn to press 1. I suspected it was a scam and googled the phone number. Seems the scammers use various numbers. More info below.

A warning has been issued after new telephone scam began circulating in Aberdeen.

The city's Trading Standards team issued the warning this afternoon following calls telling people a "payment of £599 had been authorised".

People answering the call are then asked to press one if they had not made this transaction.

A statement from the team urges residents to not press 1, adding "this is a 'phishing exercise to harvest personal details from you."

I had the Visa one yesterday, they're taking a £499.99 payment from your account, press one if you don't recognise it, and this morning the Amazon one, same story.

My cousin and his partner, well her, got scammed, she had a call from her bank allegedly, saying they had noted her transaction, which matched one she had made, and the caller/bank teller had inadvertently put extra noughts on the transaction making her account in the black for several thousands of pounds more than it should be. He asked would she take the money out and put it back in or vice versa or he would get the sack. He sounded so young and pitiful she thought he was genuine, got my cousin to help her go to the Post Office as their last bank closed down, and to replace the money within 24 hours and gave him her bank details. She was a teacher he is a chartered surveyor, it was not till they made the transaction the penny dropped with him. He reported it to the police and she eventually got her money back. It took a long time and it was a huge sum and the worry made her really ill.

Also......I keep getting a notice on my MAC from time to time saying I need to update it as it is too old/out of date for it to keep functioning with a brown open cardboard box symbol. I can click YES or NO, but either option takes me out of my desired search engine and puts me on another one. I looked it up and it is a scam to get you to use this other search engine. What they gain from it I don't know. I looked up what to do and it says just go in to your Settings and press default Settings and you get your original search engine back. Which works but it makes me uncomfortable how it is able to contact me as MACs are supposed to be Virus Proof.

I now won't look at Opera on You Tube that is from China or Japan, I see the writing in white letters on the bottom left of the video. As it says I have downloaded malware or words to that effect. It then offers to clean my MAC of the malware or it will stop working. My son in law told me never to let it, I never did, even though it stops me from quitting, it locks the screen, but I just turn it off. Turn it back on. It tells me I didn't shut down properly, then asks me to re set and I do.