A then and now from polyesterpowdercoated 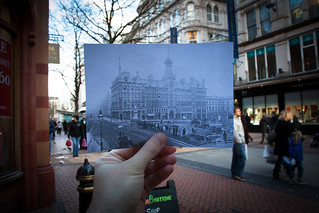 View to Stevenson Street from New Street by polyesterpowdercoated, on Flickr
R

Moderators might wish to find a more exact thread for this photo but since the Queen's Hotel does appear on this Stephenson Street section here's an opportunity to show the hotel-and Stephenson Street-in its elegance. Dated 1918, and courtesy of the National Railway Museum collection.

Staff member
And the more up to date view, although it seems to be changing almost daily. Viv.

The view 2 weeks ago (has changed since it opened yesterday, but not been back yet) 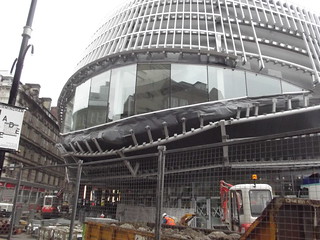 and a month ago 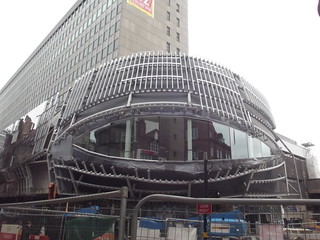 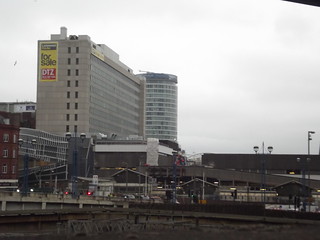 Staff member
Now here's a challenge. Where on earth in Stephenson Street was this garage? It claims to be 'The Garage of Birmingham' and was 'Always Open'. Viv.

I'm assuming it was on the corner of Stephenson Street and Lower Temple Street which features as a car showroom on the DJ Norton website. Premises do have a tradition of maintaining their trade through various decades and ownerships.

Staff member
Viv
The only garage listed in the 1910 Kellys is Ernest J Banks. From the street listing it was between Navigation st and Stephenson Place, that is , within the New St station building.

Staff member
Thanks Mike. I did wonder if it was underground as there aren't any windows. Just looks like light coming into the building from above. At first I thought it was something to do with the Exchange building. But if it's listed as near Navigation Street it can't be. Thanks for checking it out. Viv.
H

In the modern Stephenson Street there are two underground car lifts they are next door to Ian Allan book shop there are two lifts both lifts are big enough for a transit van to fit in a car will drive from the street level the lift will then go down one floor (a distance of about twenty five feet or more) the car will then be driven out of the other end of the lift into a basement floor it is a area and can hold about twenty car? or so, you may be about to see the lift entrance with google earth

UOTE=Vivienne14;489213]Thanks Mike. I did wonder if it was underground as there aren't any windows. Just looks like light coming into the building from above. At first I thought it was something to do with the Exchange building. But if it's listed as near Navigation Street it can't be. Thanks for checking it out. Viv.[/QUOTE]

Staff member
Thanks Horsencart. Just catching up on this thread and I've had a look on Streetview. Yes I can see it ....

In the second pic (near Navigation Street junction) you can still see evidence of Woolworths in the small top windows of the gym very recognisable Woolworths style. Viv.

Staff member
The Colonnade Hotel in 1883. It's address was New Street, but this view is the rear view on Stephenson Street. I suspect it looked more impressive from the rear than it did from New Street. It also seems to echo the Exchange Building architecture. Viv.

Staff member
This 1907 tinted postcard gives a nice view of the Exchange and shows the rear of the old Midland Bank (now Waterstones). But wonder why there's a fireman's ladder in the centre of Stephenson's Place? Or maybe it's a window cleaner's ladder, plenty of windows to clean around there. Viv.

Re Fireman's Ladder in centre of Stephenson's Place.
The Ladder is definitely a Fire Service Ladder (50ft Wheeled Escape Ladder) - They were positioned at strategic locations in the City Centre - I have also seen the picture of another one positioned by Jamaica Row.

Staff member
Thanks Two. Surprised about that. I suppose they could be wheeled to nearby buildings then, but expect they were pretty heavy. Viv.

Two, Would this be the photo of the ladder in Jamaica Row that you refer to?

Yes - Phil.
Exact photo I was thinking of!

Staff member
Lovely photo Bernie. You can just make out Woolworth's (rear) to the left. And what a big M & B sign into the Exchange building. Must have been a bar in there, or maybe it was for the function room. And a sweet little bubble car captured there too. Viv.
M

My Grandmother is in this photo and I think it might be The Queens Hotel. 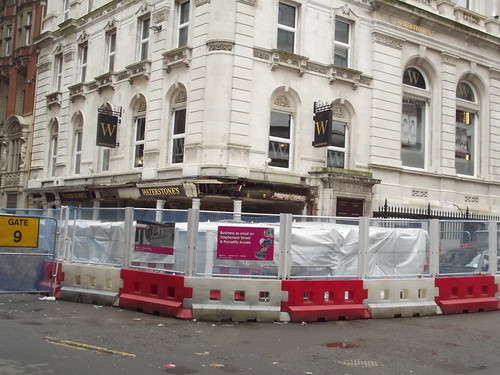