Yes it's still there, it's Grade I listed I think. You'd see it on the various bus routes along the Stratford Road.

Ladypool Primary School is next door to the right. A supermarket to the left.

This is one of those times when several posts have very personal memories. This is my old parish church and played quite a big part in the life of our family.
I wouldn't say we were goody goodies it was just part of what we did. I went to Sunday school, Boy Scouts, Church Lads Brigade, Alter Boy (acolyte) etc.
From my teens the main reason for attendance was the Youth Club, this supplied friends, girl friends etch too much to say and some best not said.
Also went to Stratford Rd School from pre-school to age 11, from 1943.Again too many memories to share.
Cheers Tim
R

I remember St Agatha's suffering a devastating fire ,Its amazing it has survived.

The only memory I have of St Agathas is of the funeral of my youngest uncle at aged 49. It's a quite large church and it was the first time I had ever been inside the church. As large as it is we had to squeeze the congregation in, my uncle although not a churchgoer or a religious person used to drink with the ex vicar of the church in The Hereford Arms a short distance away. The vicar had moved to another church down south somewhere but he came up for the day to take the service for my uncle as they were good friends.

The point of this story being that even though this was some 2o years ago now, when talking to the vicar after the funeral (in the Hereford) he said that the congregation that day had been the biggest he had seen in the church for years and it was such a pity to see such a good church hardly being used. So if as been stated here it has a Grade 1 status, then that is probably the only thing that is stopping it being demolished.

Listing Text
STRATFORD ROAD
1.
5104 Highgate B11
Church of St Agatha
(formerly listed under
Sparkbrook)
SF 08 SE 12/59 21.1.70
I
2.
1899-1901 exaeptionally fine and original church by W E Bidlake dominated
by its great tower, in a Perpendicular style freely reinterpreted in an
Arts and Crafts idiom and of very fine workmanship. Fine quality red brick
with stone dressings. Aisles and clerestory. The west front with vestibule
porches to aisles flanking the magnificent lofty tower containing the low
baptistry apse at its foot. The tower has slender octagonal corner turrets
with their upper stages composed of red and white chequerwork surmounted
by open work turret/pinnacles crowned by lofty original wrought iron finials.
The stair turret on the south face also has an imaginatively designed top
stage and in carefully proportioned to emphasise the soaring scale of the
tower and the powerful belfry openings. Above the baptistry is a fine
sculptured sweeping frame work to the west tower window and equally inventive
sculptural and carved decoration enlivens the cambered stone arches and
jambs of the flanking vestibule doorways. The Gothic of the fenestration
to the aisles and clerestory is more conventional. The interior, restored
after the the war and thefire of 1957, is a remarkably sophisticated original
conception, faced in pale buff brick blending with the stone dressings.
The arcade hood moulds have Bidlake's typical finesse of detailing, almost
dying into the piers but with a scrolled curve carved over the vestigial
ribs of the pier, the latter is then carved up to divide the large clerestory
windows and terminating in richly and freely carved foliage corbels; the
timber ribs of the roof carrying on the lines of the masonry. The chancel's
pointed barrel vault is born by stone arches springing from very richly
carved corbels. The sophistication of the carving and quality of the moulded
detailing is consistent throughout. Bidlake's furnishings were destroyed
in the 1957 fire.

This text is from the original listing, and may not necessarily reflect the current setting of the building.
Click to expand...

Don't usually take photos of this church or of Sparkbrook, but took this one of St Agatha from the bus. 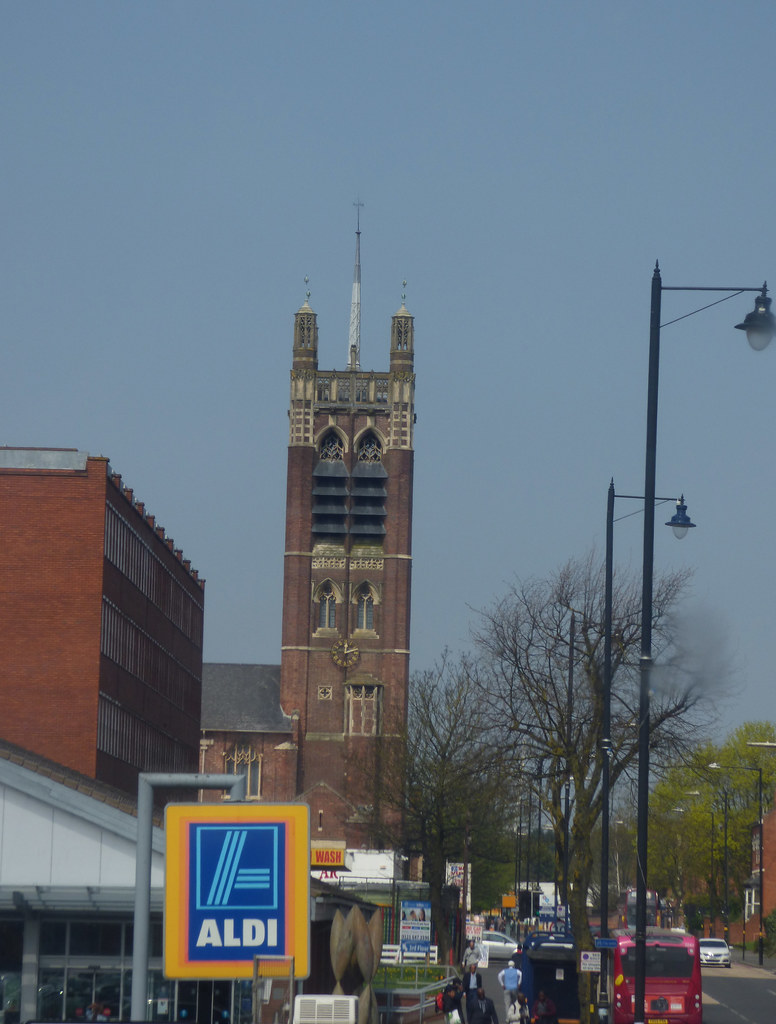 106491 became part of our gang's extended play areas. Did anyone else take the precaution of holding your left hand around your neck so that the rats could not bite your throat!
No fear of falling into cellars or having staircases collapse under you but we were wary of rats ( as big as cats!).
Cheers Tim

Nice picture and can see my old primary school!
P

Born in Priestly Road in 1949, I was christened in this church. I never new the correct way to pronounce it. Aga-thas or Agathas, perhaps someone can solve a 70 year old conundrum!

Thinking of names? Complete 2020 information on the meaning of Agatha, its origin, history, pronunciation, popularity, variants and more as a baby girl name.
www.thinkbabynames.com
Forget about the baby bits, but the sound is as most people would pronounce it. Think of Agatha Christie.
P

Thinking of names? Complete 2020 information on the meaning of Agatha, its origin, history, pronunciation, popularity, variants and more as a baby girl name.
www.thinkbabynames.com
Forget about the baby bits, but the sound is as most people would pronounce it. Think of Agatha Christie.
Click to expand...