Hi! My father Keith used to work at the Museum of Science and Industry, Newhall Street from 1963 - 1996. From a very early age I remember being brought along by my dad to the museum's Steam Weekends held in March and October each year, and also the annual Traction Engine Rally held the second Sunday in May. The rally started May 1960 and ended in May 1995. The museum had many many wonderful exhibits, the 1924 Burrell steam tractor 'Busy Bee' being my fave! Also of note was the 1892 Aveling and Porter steam roller, which sadly along with the Busy Bee is in storage as part of the Birmingham Museum collection. It was heartbreaking to see the science museum close in 1997, but very wonderful memories have come from there.
R

Hi, What memories you must have! I loved the Science Museum, so easy to to travel to and to get around. I remember the lighthouse part and the jacquard machines, the button-makers and the bread-slicer, also something to do with soda water? Not forgetting waiting for the train to move!!! Happy days!
rosie.

Here it is at the Museum Collections Centre (in 2012) 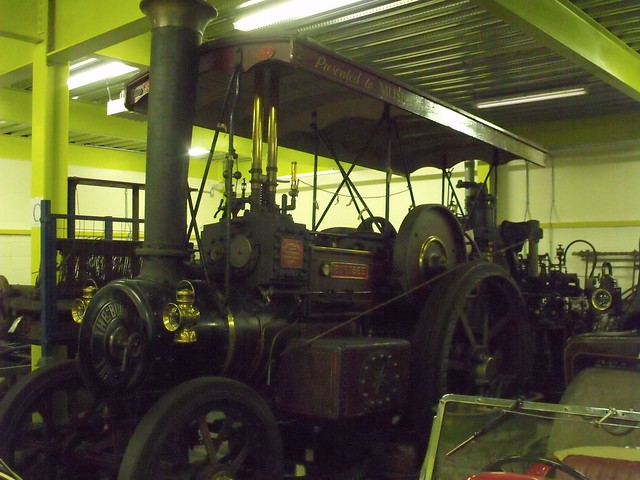 and another similar one 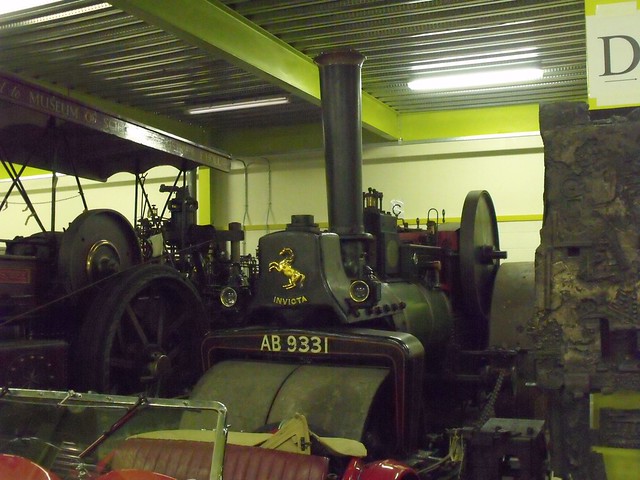 This one at Thinktank 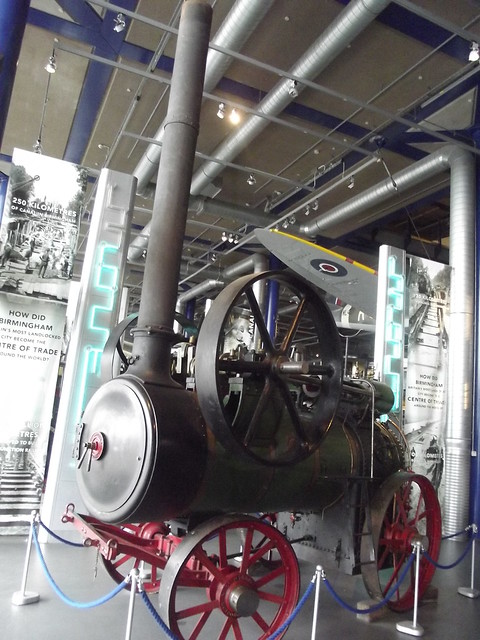 The Busy Bee still looks in good shape, though I should imagine she's in dire need of a boiler inspection to test her firebox and tubes, same applies with the 1892 Aveling and Porter roller. The bottom pic is of the lovely 'Ruston and Proctor' portable engine, which when in steam inside the Science Museum for the twice yearly Steam Weekends make for quite an impressive sight, plus we used to have delcious baked potatoes cooked in her ashpan! The 1904 Foden steam wagon is also on display at Think Tank, though it's very highly unlikely either Busy Bee or the roller will see the light of day in the near future, which is quite a shame. Apart from the Science Museum's steam weekends and annual traction engine rally, we used to take the Busy Bee out for the Birmingham Lord Mayor's show, and to various events at the Black Country Museum. Very happy days!
V

Just to mention the Newhall Street traction engine rally, that was the highlight of my year in my youth. We used to have around 10 - 12 engines turn up the day before the rally from the afternoon onwards and on the day of the rally it was always a delight to see the rest of the engines arriving either under their own steam or by low loader. At around 10am Bill Hunt used to arrive with his beautiful 98 key 'Wondeland' organ, towed by a lovely 1952 Scammell tractor. The organ used to be powered by Bill's lovely 1921 Foster showman's engine The leader, which made for an impressive sight. Those days are very sadly missed indeed.
V

Here's Bill Hunt's beautiful 'Wonderland' 98 key Marenghi organ, being set up for one of the Museum's traction engine rallies in 1987. The lovely 1921 foster showman's engine The Leader always did a spectular job of providing the organ's power. Other showmans engines that powered the organ at the Newhall Street rally over the years were 'Winston Churchill' and 'Goliath'. Other great showmans too that used to attend were Dave Walker's Burrell 'Princess Marina', and 'Lord Nelson' (ex- Anderton and Rowland's) that used to come all the way from the Beaulieu Motor Museum, to attend.

I still like the old Museum of Science and Industry better!

What memories those pictures evoke, especially the Railton Special driven by Sir John Cobb at Bonneville Salt flats. Is my memory playing tricks but I seem to remember that there was a flight of stairs to go up to gain entrance and displayed there was a full suit of Samurai armour?

I have never visited the Think Tank so cannot make comments. However, I visited the Science Museum - the subject of this thread - in 1963. I was not long married and had a baby son. We visited the city as my wife had never been there before and was curious about the city and the part of Warwickshire where I had lived until some nine years previously.
I wanted to see tram 395, which I knew was part of the exhibits. This was the highlight: I don't not remember what else we viewed. Rather than post a lot of pics here I post the link below which does justice to the tram and the cities transport history.
https://www.robertdarlaston.co.uk/Trams.htm

jmadone said:
What memories those pictures evoke, especially the Railton Special driven by Sir John Cobb at Bonneville Salt flats. Is my memory playing tricks but I seem to remember that there was a flight of stairs to go up to gain entrance and displayed there was a full suit of Samurai armour?
Click to expand...

I think there was, upstairs from the science section. I recall there was a large display of pens and nibs too. The Samurai armour is now in the art gallery.

My Nan used to take me there as a special treat in the school holidays - it always seemed more interesting than the art and natural history museum. I always used to stop and spend ages in the entrance looking at a an exhibit called 'The 'Alchemist' - from memory it was a cabinet on a stand with a figure inside that reminded me of a wizard - whatever happened to it

Oh and that strange musty smell that pervaded the whole building

That's how I remember it

mbenne said:
My Nan used to take me there as a special treat in the school holidays - it always seemed more interesting than the art and natural history museum. I always used to stop and spend ages in the entrance looking at a an exhibit called 'The 'Alchemist' - from memory it was a cabinet on a stand with a figure inside that reminded me of a wizard - whatever happened to it

Oh and that strange musty smell that pervaded the whole building

I remember that Alchemist exhibit , I used to gaze in wonder about a lot of these exhibits . The locomotive in latter years was good also
especially when it started to move

That entrance used to sit over the top of the canal

In later life I worked on several major IT projects in offices close to the museum. When I became stressed I used my lunch break to walk around the museum. Looking at all the complex exhibits made years before my time made me wonder how many problems the inventors and developers must have encountered. Made my problems seem insignificant and I always came out feeling inspired!
Until I started looking into family history I never realised that a lot of my dads family had lived and worked in close proximity to the museum and ended up in Warstone close by!
W

Morturn said:
That entrance used to sit over the top of the canal
Click to expand...

It's a long long time ago now, autumn 1953 in fact, but my first job on leaving school was working for Birmingham City Transport's Cashier's Office in the Council House extension in Congreve Street, opposite the recently discussed White Horse pub. We also had a Sports & Social Club and a Stationery Office in the Elkington's building and I found the Science Museum fascinating. I'd only been at BCT a week or so when I was told that I was that I would be spending a whole week in the Stationery Office. "Don't worry, everyone does it, and by the time your week is finished, you will know how to wrap a parcel of any shape or size", I was told.

I certainly did as every garage, office & department's stationery order was different every week. I certainly acquired a skill that was very useful at Christmas, enjoyed numerous visits to the Science Museum, and improved my snooker skills at lunchtime in the Social Club. The photographs above look vaguely familiar, but it was 65 years ago and I left Brum entirely in 1961. Sorry to see it has gone though.

Staff member
Who's having the most fun ? The kids or adults ? Viv.

Vivienne14 said:
Who's having the most fun ? The kids or adults ? Viv.

We bought our eldest son a Hornby train set for Christmas , namely the Intercity 125 back in the 70's he must have been about 8 . Imagine Christmas Eve yours truly well oiled after the pub , of course I had to assemble and test it , it was brilliant after getting it going forward with the trains headlights on I had to reverse it see if the rear lights worked . Of course they did , if it hadn't been for the good lady telling me about what time it was , I'd still be there playing with it . Just had a thought , do you know I might buy myself one this week >
You must log in or register to reply here.
Share:
Facebook Reddit Pinterest Tumblr WhatsApp Email Link
Top