Edit. This thread is about the New Rep on Broad Street Centenary Square. For comments about the Old Rep in Station Street please see:
https://birminghamhistory.co.uk/forum/index.php?threads/old-birmingham-repertory-theatre.9035/

IT was always going to be a challenge to find an event significant enough to mark the closure of the historic Birmingham Repertory Theatre for two years.
What show could possibly recall all of the productions and experiences encapsulated in the Centenary Square building which has been open for 40 years?
Instead the Rep went for a novel approach. Don’t invite the audience to watch a show. Ask the audience to be the show.

And so for one hour on Saturday morning more than 300 of us were The Rep.
Leading from the front, or rather from on stage, was BBC WM presenter Joanne Malin who gamely egged us all on despite admitting to that she was suffering from “the lurgy”.
And spearheading the performance, called The Final Curtain, was Birmingham performance poet Steve Camden, better known as Polarbear.
Commissioned by the theatre to write a poem highlighting the relationship between the theatre and the public, his words were loud, proud and definitely pro Birmingham.
“Birmingham is full of tongues and words from all over the earth, Birmingham knows what it’s worth,” being just a couple of lines. Steve and members of the youth theatre group Young Rep performed the poem and we were then all asked to join in. With a sheet of paper with the words and the lights up in the house there was no escaping being part of The Final Curtain.
And that stereotypical English reticence to join in was swiftly thrown aside by the enthusiasm from Steve, Jo and the young people.
At its close, we were all invited to sit and ponder for a moment, take a few pictures and create our own memories of the Rep. Enough to keep us going until 2013 when the newly refurbished theatre is due to open.

This event may not have been everyone’s cup of tea, but it was an imaginative and memorable way to mark the closure. With Thanks to Diane Parkes & the Birmingham Mail. Len.
Last edited by a moderator: Dec 1, 2017

Wendy said:
Thank's Charlie and ellbrown I only caught the end of the report and did think it strange. Thanks for putting me right. x
Click to expand...

A few days later the hoardings went up. 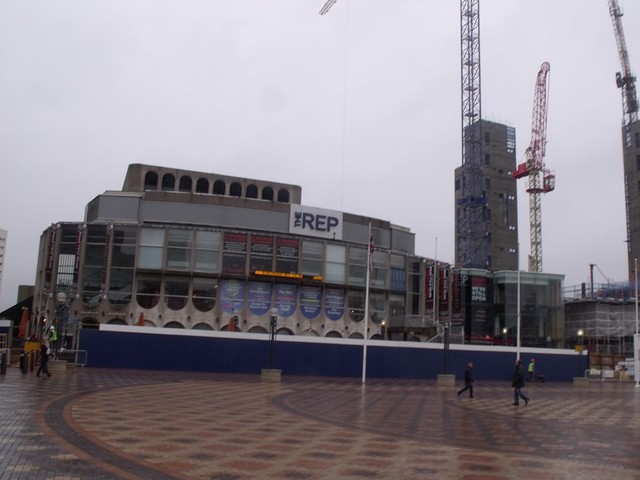 The REP behind hoardings - Centenary Square by ell brown, on Flickr

It was first built in 1971. First refurbished and extended in 1991 (after the ICC was built). So seems like they do it up once every 20 years!

They will spend two years performing at other venues (until it reopens in 2013).

Took a few pictures of the hoardings outside The REP.

Down one side is the history of The REP 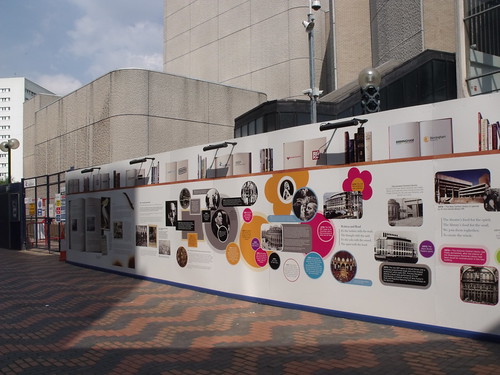 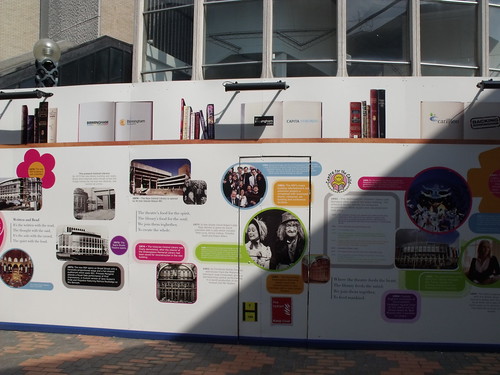 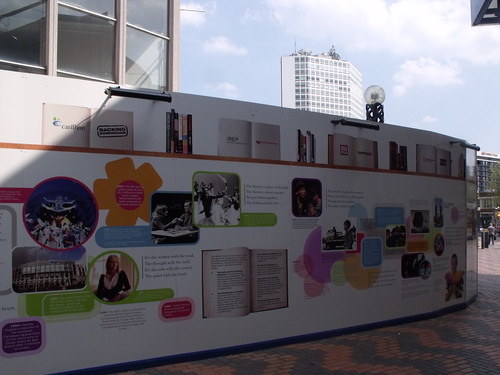 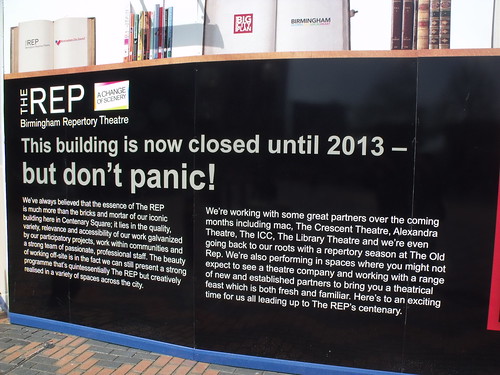 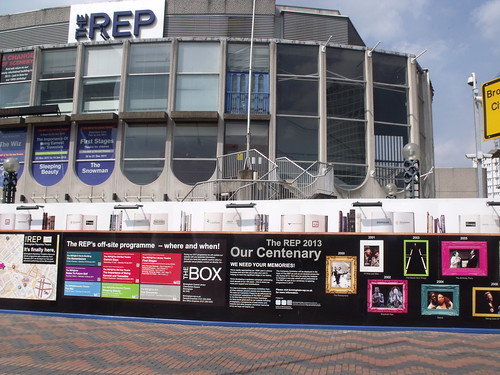 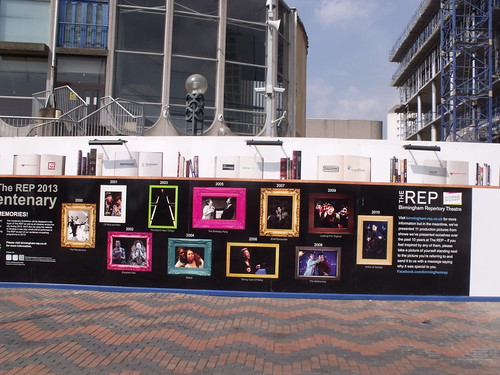 Location map of where the REP will be 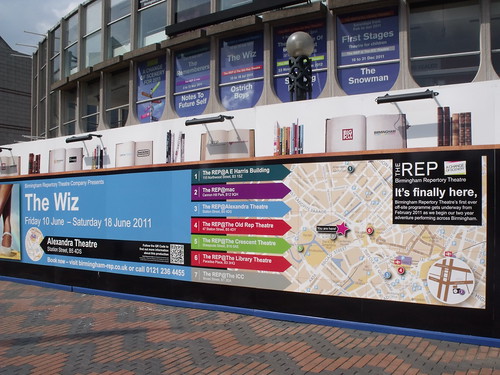 The REP, Centenary Square - hoardings - It's finally here! by ell brown, on Flickr

Some pics inside the refurbished REP - ground floor.

LoB to the REP 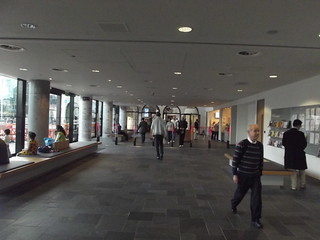 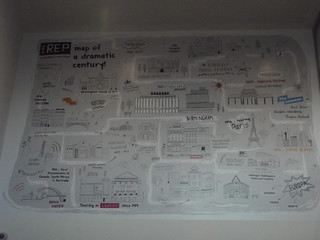 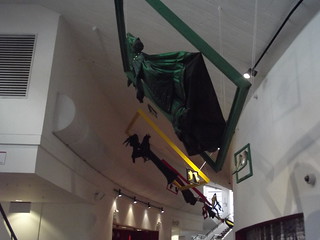 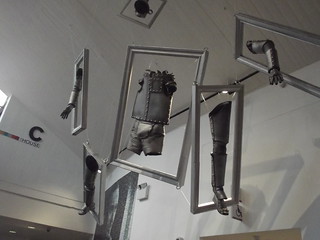 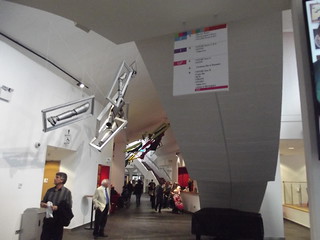 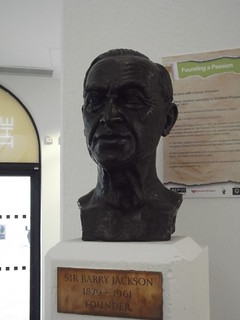 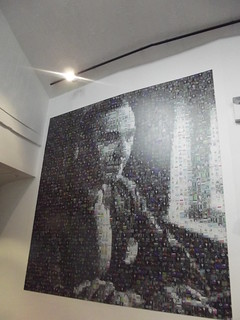 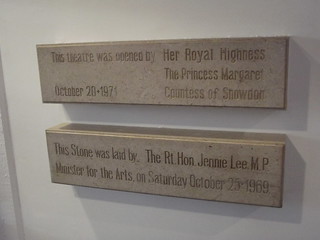 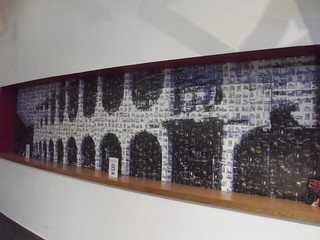 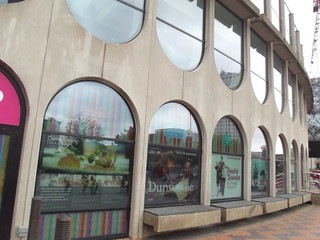 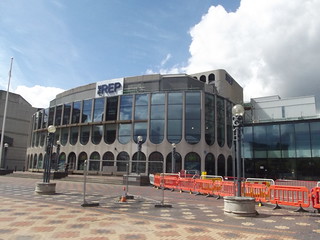 The back on Cambridge Street 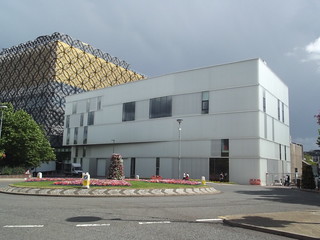 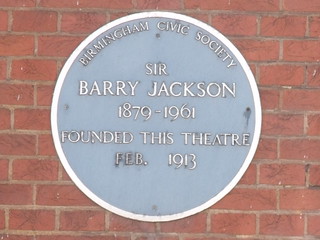 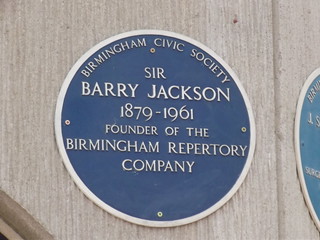 I remember taking the twins to see Robin Hood there with Robert Morris playing Robin. It was a brilliant show. Jean.

Staff member
Saw Hywell Bennett in 'Wind in the Willows' there. Be about 1970s. He was a brilliant Toad. A very energetic performance too. Viv.

Viv thanks for that. I do remember it too. Jean.:frog:
V

Staff member
Hi Jean. I've looked it up and Toad of Toad Hall was there in 1975. I remember it as a thoroughly enjoyable performance. Hywell Bennet was an excellent 'Toad'. Viv.
R

Maybe an admin could create an Old REP and a New REP threads.
V

Staff member
Thanks Ell. There's an existing thread which I've re-titled and have moved the post to that thread below. Viv.

Saw this bust in the new REP back in 2013 (after the Library of Birmingham opened). 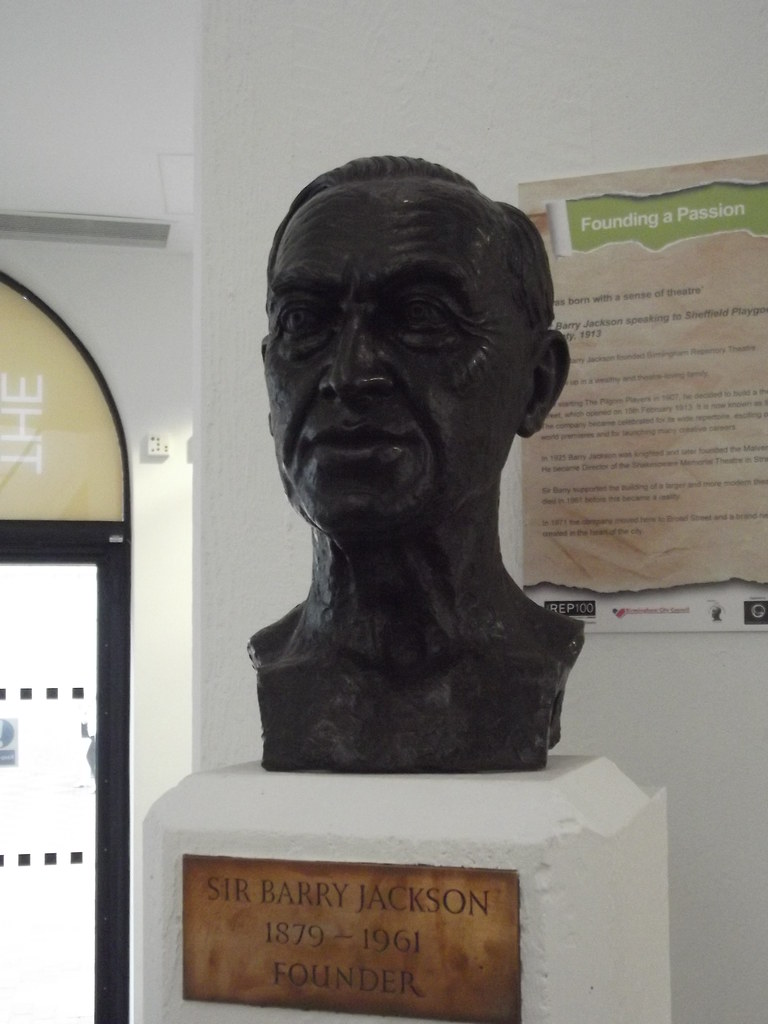 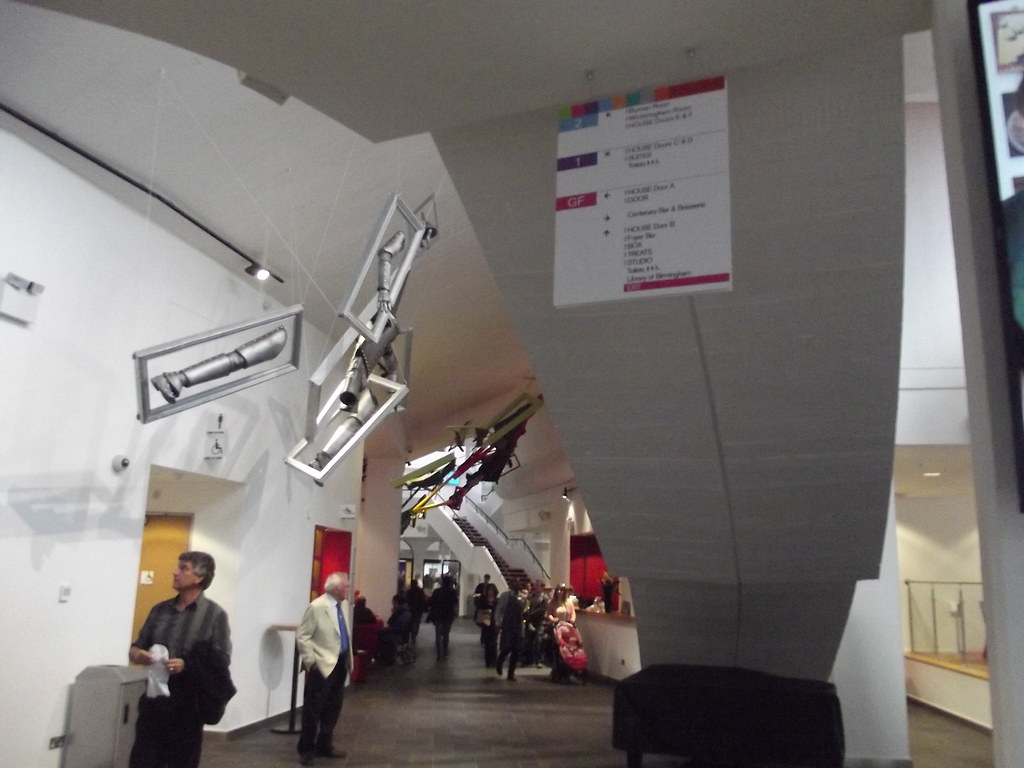 From above from the Library of Birmingham. 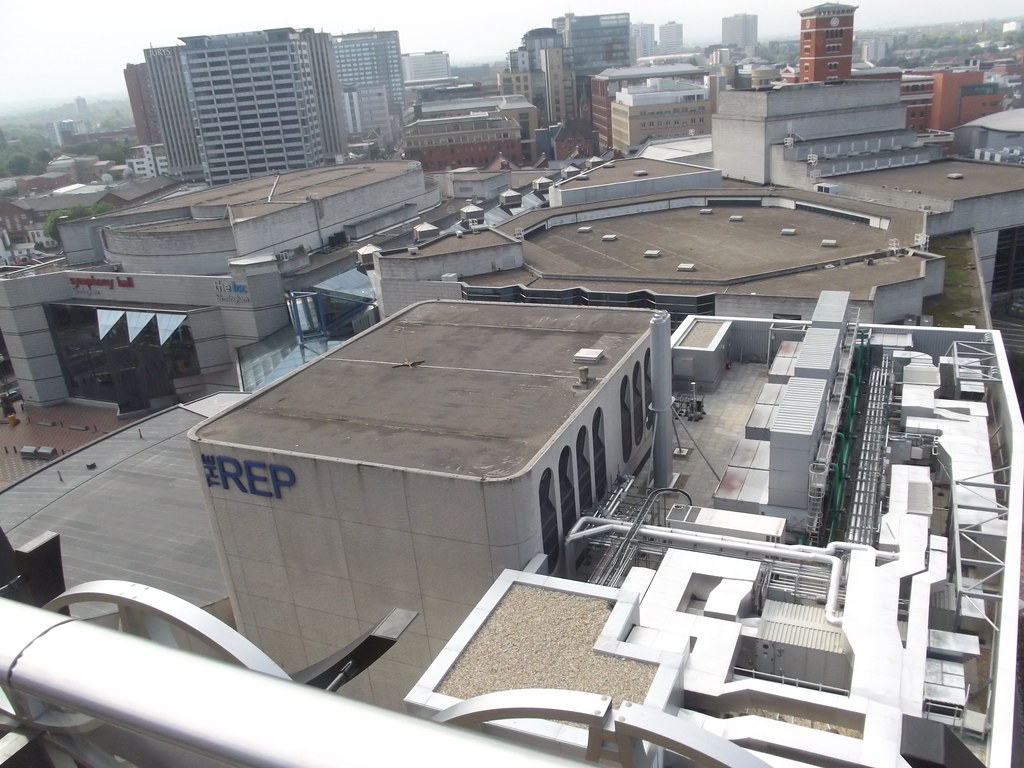 Staff member
Like the design. At first thought it was a missile, then realised there's a hint in the title ! It certainly attracts attention - the main purpose of course. Viv.
R

Much better than the small A board type that you dont see untill you have fallen over it.
V

Staff member
View from the Rep bar across to the Civic Centre In 1971, a view impossible today since the new library construction. Viv.