No, it wasn't the Mikado - that had been going for donkey's years and was much too large. This place only opened in the late 1950s and was much smaller. Jayell (Judy) might remember if she sees this as we both frequented the same places at the same time.

Martineau Place is ok - opened in 2001. Although a lot of units are now empty. Two Poundlands at both ends of Corporation Street.

Sainsbury's Central is still near the Union Street entrance. 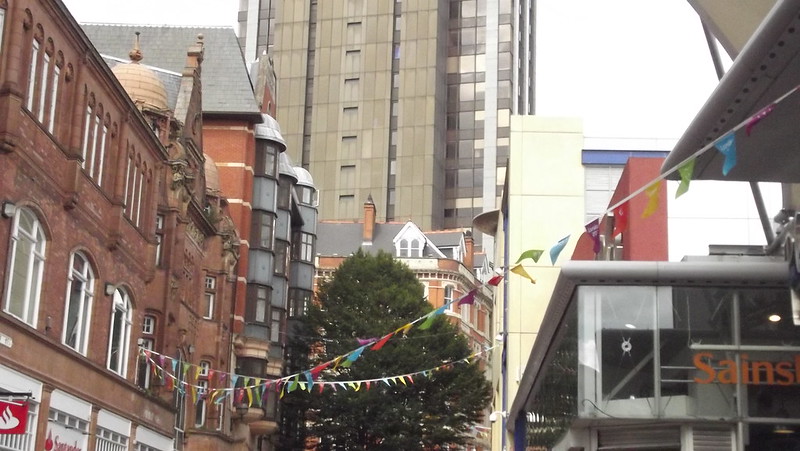 Caffe Nero is on Corporation Street. 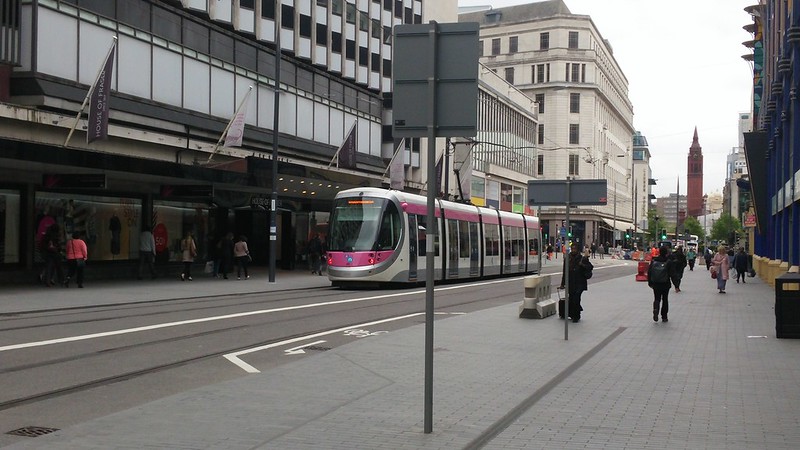 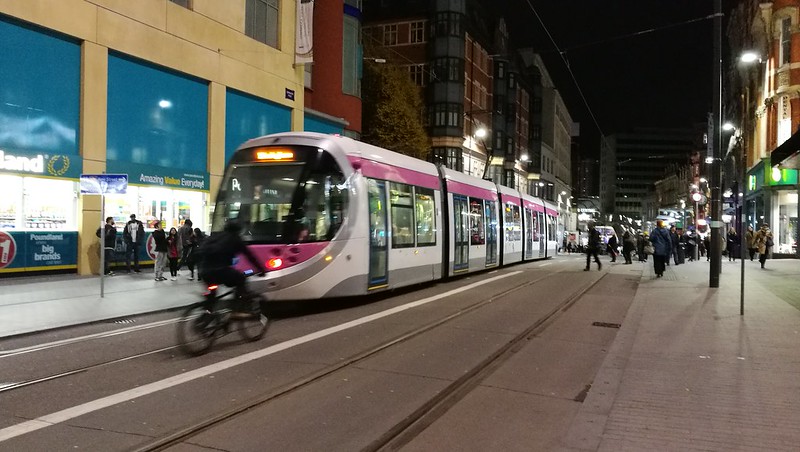 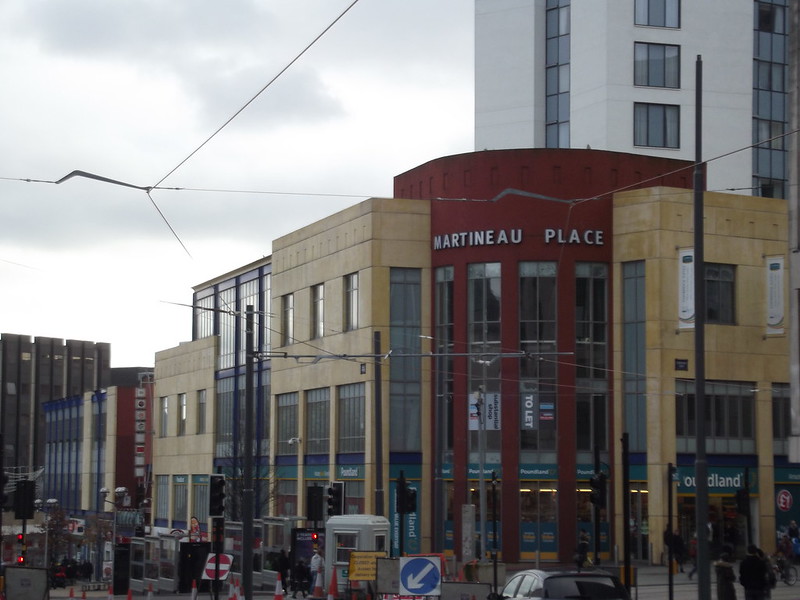 No, it wasn't the Mikado - that had been going for donkey's years and was much too large. This place only opened in the late 1950s and was much smaller. Jayell (Judy) might remember if she sees this as we both frequented the same places at the same time.

Maurice, your right the cafe was a small place opposite the no 6 tram terminus or no 33 bus terminus, there were very little sitting places but being as it was opposite the tram and bus terminus it was a case of coffee on the run...what was the name of that place???....Brenda

Martineau Place update from today. Martineau Way is what was Martineau Street. 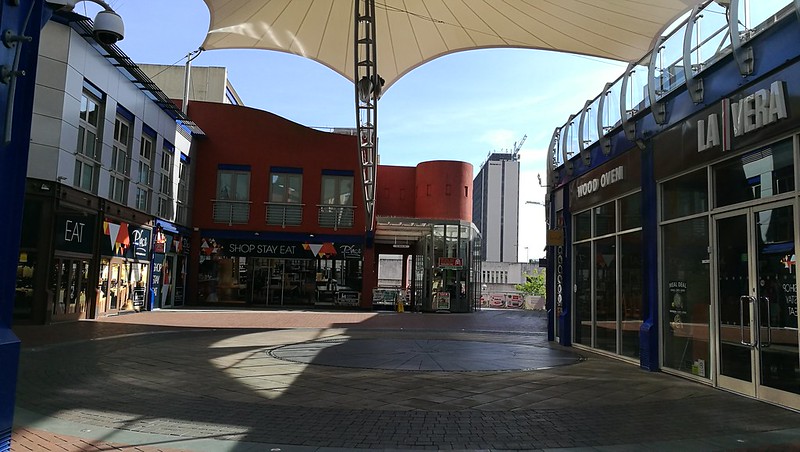 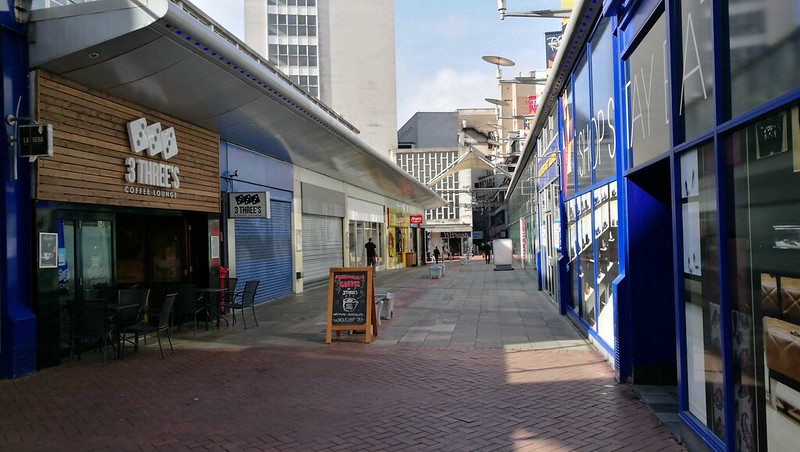 At least the name Martineau still exists, even if modified.

Staff member
Sorry to say I was never a fan of the Martineau Square area (I don't remember Martineau Street). Not too sure it looks much better today. But yes Alan, at least the name's survived.

Why was Martineau Street redeveloped ? Was this part of the city being bombed in WW2? Or was it due to ring road developement ? Viv.

There's this on Wikipedia https://en.wikipedia.org/wiki/Martineau_Place although it's a bit out of date. This was a development from 2000 to 2001. One Martineau Place got refurbished into a hotel a few years ago. Called Staybridge Suites.

I am interested to know if anyone might have a photo of Martineau Street from about 1908 that would include the storefront of Eclipse Motor & Cycle Makers at 20 Martineau Street. I do not know for sure how many years it was there, but I do know it was there in 1908 (found the listing in Kelly's Directory of Birmingham for that year). 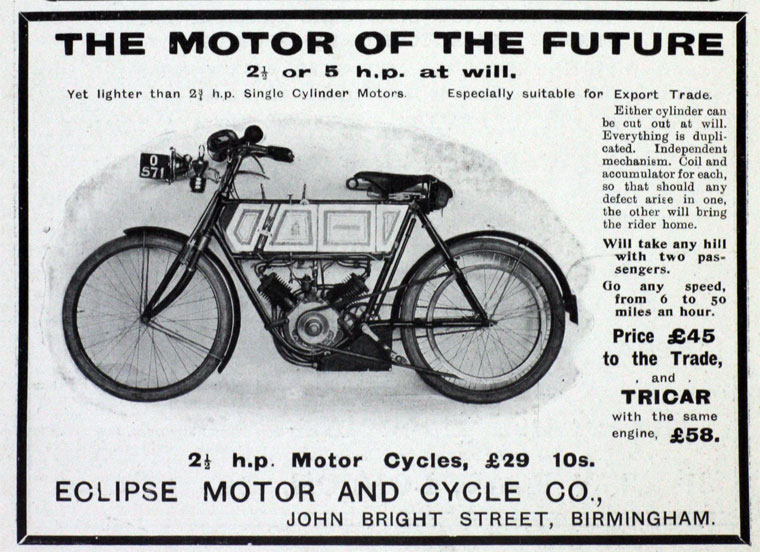 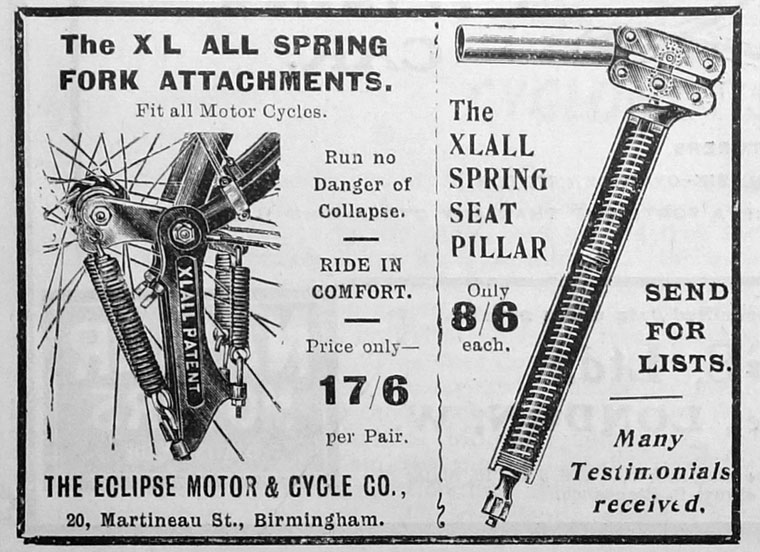 Hi Mark, welcome here. I have been unable to find any pictures of their Martineau Street or John Bright Street premises. He is an interesting place:

There doesn't appear to be anything on British Library Newspapers, and since any photographs of that period are unlikely to show any clear detail, it might help if our map expert, Mikejee, would kindly pinpoint the location of number 20 on a map.

The Library of Birmingham is a possible source, but I understand that they are not that quick to respond to emails.

They certainly appear to have been in business by 1903, though not necessarily in Birmingham:-

According to The Scotsman dated 20 March 1907, they exhibited their XL sprung forks and sprung saddle post (see Radiorails' post above) at the Motor Show in Edinburgh, though at least one other company was showing similar devices. Like many small motor vehicle companies of the early 20th century, their trading life was very brief it seems.

In respect of Martineau Street, we used to drink on a Friday night in a pub called the Cabin was that in Martineau Street or was it in a passageway that ran off Martineau Street. On this one my memory is completely blank, I think it also was a Butlers house or am I wrong again? Finally a question that has an answer somewhere near Martineau Street...where was the café where we used to eat Kunzles cakes, I know you could get them in the place on the first floor in Great Western Arcade, but did Kunzles have their own café?

Thanks very much for the pic & the map. Quite honestly, I think that probably is as good as we are going to get. You've in reality narrowed it down to three years maximum at the Martineau Street premises.

That picture must be at least 100 years old. If you took out the vehicles and people, it would look exactly as I remember Martineau St in the 40's and 50's. So what I'm saying is that most of the changes came in the 21st century. Would I be correct in saying that the car in the foreground has a Coventry registration.
Dave A
M

Wow! Thanks. I am generally aware of the heritage of the company (Eclipse Motor & Cycle) and had quite a few of their adverts, but the adverts from that site in Spain were new and of interest.

Below is a listing of the South side "residents" of Martineau Street beginning at the East end from Kelly's 1908 Directory of Birmingham. It contains breaks where intersecting streets occur including Crooked Lane and even Union Passage. The listing indicates that 20 Martineau Street is just to the west of Union Passage. I found a period map of the area at https://maps.nls.uk/geo/explore/#zoom=17.34333333333333&lat=52.4808&lon=-1.8949&layers=176&b=1 (I am not sure of the date of the map, but it is apparently no later than 1920) and have drawn the lines of the addresses to their location on the map.

I have a number of questions that I am looking into about this business, but I did not want to overwhelm this group. The key questions I have include:

1. Does anyone know who the principle owner of the business was? Are there any repositories of business filings or records in Birmingham from that era? I do know that Timothy Shepherd (resident at 108 Oakfield Road, Bals all Heath) was at least employed there, but I suspect he was the business owner, so I am interested to know if there are any records as to if he was a partner (who is partner(s) was/were) or sole proprietor.

I have a few other questions related to the business based on the current state of my research:

a. As others have also noted, it seems that Eclipse Motor & Cycle business first appeared at 115 John Bright Street in 1904 or before (the advert posted here with a John Bright Street address claims 1904, but they were also listed in the Kelly's 1905 Directory of Birmingham at that address).

b. As noted in the adverts posted here, they had a series of products they sold under the "XL'ALL" brand (seat springs, spark plugs, etc).

c. At some point after 1908, but by 1911, they moved to 6 & 7 Moseley Street, Birmingham (which is on the south side of Moseley Street just southeast of the northwest end of Moseley at Sherlock Street).

e. By 1913, XL'ALL was located off Highfield Road in Hall Green (1912 adverts and Kelly's Directory 1915) but other research I did (which I cannot find at the moment) indicates they were on Robin Hood Lane in Hall Green (given the proximity of these locations, it seems possible they never actually moved physical addresses but rather adopted an address easier to find).

So the other questions...

2. What happened to XL'ALL? I cannot find any mention of it after 1919. Any idea where there might be records of businesses in this period? I am aware that the London Gazette often has information, but that seems only to be associated with insolvency, bankruptcy, or other legal proceedings.

3. Does anyone have (or know of the location) where PHOTOS of the storefronts at these addresses might exist: 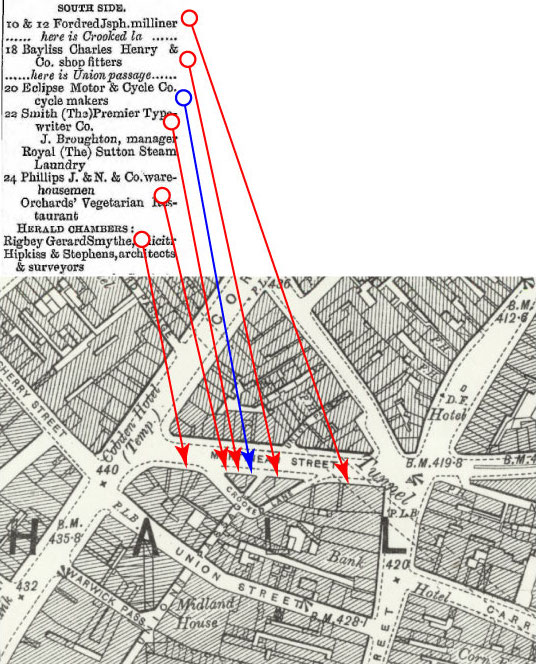 Some years ago, Companies House made the decision that it would destroy all records of a company once a point 20 years past the last date of trading had been reached. This was despite the fact that almost all records were by then on microfiche and for £1 you could purchase a copy of each microfiche. So the only record of a company formally going into liquidation would be in the local newspaper, the London Gazette, and with the lawyer who handled the winding-up process. Just occasionally, the more important companies might have some records, which rarely included personnel records, deposited with Birmingham Archives, now at the Library of Birmingham, but there was no legal obligation to deposit these. They may not even be in Birmingham

Of course, the company could have been bought out by another company, and in this case you rarely find any statutary notices as to to the best of my knowledge, none were necessary.

Have you checked the Patents Library? These will state the original owner of the patent & should have survived.

As to photographs of shopfronts from that era, the best of luck!

By the way, I disagree that the "shoe warehouse" store is at #20 Martineau. On the right in the photo, directly (perpendicular) across the street from the front of the "shoe warehouse" on Martineau Street, you can see the small Union Passage between two buildings. The store on the left of Union Passage is Roneo Ltd and the one on the right with "Telegraph" in the banner is Telegraph Works Co. These correspond to the following businesses in the 1915 Kelly's Directory:

The layout of the roads on the maps indicate to me that this photo was taken almost at the beginning of Martineau Street looking westward and that is actually Crooked Lane coming in from the left - before the shoe warehouse store. That conclusion is bolstered by this excerpt of the businesses on the South side of Martineau Street from Kelly's 1915:

Thus, in 1915, Taylor Adams, a stationer, was at #20 Martineau, which was just past the break in the buildings at Union Passage that you can barely make out (the break in buildings that is) if you look past the shoe warehouse.

Staff member
Mark
you will note in post 52, that the business is listed in John Bright St in the 1903 Kellys. It is usually taken that the Kellys of recent years (recent including 1903) refer to the survey probably taken the year before. Therefore the firm was in existence there from at least 1902.
XL'ALL are listed at Webbs Lane , Hall Green in the 1921 Kellys (again this would refer to 1920), but is missing from the 1924 edition..
Nothing other than private addresses are listed in the 1924 Kellys, but the c1916 OS map does show a factory-type building (appearing after the c1904 map) as shown in red below. the site in the 1950 Kellys was the electrocar factory, making electric vehicles. It is now housing.