Edifi said:
Are you going to have Carp or Stickle backs in there.Looks to good to be true.
Click to expand...

I reckon piranhas should be good for seeing off any herons.

rosie said:
Watch out for the herons!!
It's looking wonderful, such hard work but worth it. We are enjoying your pond too!
rosie.
Click to expand...

i agree rosie.....its a great effort

The outlook from my upstairs windows, some real gardeners and some just keep it tidy.............then me.

Looking back through some old photos, came across some from the old Birmingham Flower Show, when it was held in Perry Barr Park. Not sure but sometime in the 1970s?

Does one of them show Midpubs doing a bit of night fishing? 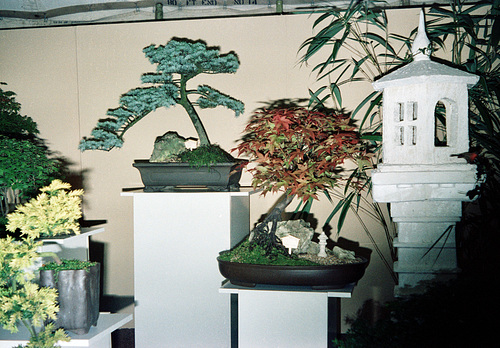 It's next door's grandson's car, hasn't moved from the spot for about three years.

jukebox said:
From today (before the wind batters them all down)

Is the clematis a Nellie Moser?
Bob

Bob Davis said:
Is the clematis a Nellie Moser?
Click to expand...

Yes it is a Nellie Moser. Bought from J Parkers in 2015. It hasn't flowered this well before!
John

All these people that get flowers named after them I wonder who they are. Obviously King Alfred daffs, gran said they were the best and King Edwards spuds. Aaron's rod from the bible we have that or we will have. Joseph and Mary Adam and Eve just going over. But Esther Reed. Ena Harkness. and Nellie Moser. I wonder who Creeping Jenny was? A politician maybe. Hairy Mary, gran's name for teasel.

Who says we don’t get on well with birds?

Pedrocut said:
Who says we don’t get on well with birds?

I Tawt I Taw a Puddy Tat

Not in the garden, but behind the guttering of the house. Starlings built a nest and had chicks. Each time one of the parents returned with food, three
open beaks would appear above the guttering.

Today, one appeares to have fledged, so then there were two.

Except that the third kept coming back to the nest, joining the others, and expecting food. The Mother was having none of it. "Go find your own food!"

There were a couple of right ruddy scraps before it got the hint. At one point they were hanging with just one set of claws (too fast to work out which) hooked over the edge of the guttering, whilst they had a 'set to'.

This field is 50 yds from my house. The farmer hasn`t used it for 3 years & now nature has reclaimed it. I don`t know what the flowers are but they`re gorgeous to look at.

Smudger said:
This field is 50 yds from my house. The farmer hasn`t used it for 3 years & now nature has reclaimed it. I don`t know what the flowers are but they`re gorgeous to look at.
Click to expand...

Re-wilding is so on-trend at the moment. I think there's some financial motive for farmers - even The Archers have a re-wilding project on the go!

www.midlandspubs.co.uk said:
Re-wilding is so on-trend at the moment. I think there's some financial motive for farmers - even The Archers have a re-wilding project on the go!
Click to expand...

there is. they get dosh of the gov for the land they let nature reclaim.
E

Think a lot of farmers will be Un Wilding when we leave the EU.

Theyre not going to get as much from our government as they got from the EU to let the field grow wild.They will have to grow to survive
W

JudiM said:
I bought 4 bags of compost online from Wickes & it was about a month for delivery! So yes, compost, toilet roll & plain flour seem to be the new gold measure

Thankfully, there is a little independent shop near me that sells all sorts of lovely plants as well as being a greengrocer. I bought some saxifrage from there last week & some dianthus today. Trying to build up a stock of slug resistant flowering plants as I have a lot of shrubs & not many flowers.
Click to expand...

Williams,there are quite a lot of plants around that the slugs teeth cant bite into. Try Gerbera nice different colours from white through to deep red. Look up T&M
W

www.midlandspubs.co.uk said:
Still no further water added as I am still placing my rocks on the upper shelf of the pond, along with the fact that I am awaiting a delivery of Scottish Pebbles. In the meantime, I cracked on with my terracing for which I acquired 500 rocks on good old e-bay with delivery included. They did need jet-washing - that took four hours on Friday. All have to be carried to the back of the garden. Bought a few plants from Shirley Aquatics using their click-and-collect service. I have some more in buckets awaiting planting in baskets. Anyway, things are starting to take shape ...