Not that I would ever question anything you said about Birmingham trams or buses, but both those photos look like they were taken in Willows Rd to me.

Yes they are Phil, I should have qualified my reply - thanks for the accuracy!
I have a photo of a tram in Edgbaston Rd but it's temporarily locked in my failed computer hard drive. The 'bundy' clock is there in Willows Rd so that must be the real location of the terminus.
I think the tracks were at the side of the road in Edgbaston Rd, as they used to operate 'one way' round a loop there, but I'm not sure if they used the stop there that the 1A bus used as well.

They did continue round on to Edgbaston Rd as you can see on this photo. Did they then go down Cannon Hill Rd? As for you photos, I had the same thing happen to me my computer went down with about a 1000 photos that I hadn't backed up. I purchased a USB hard drive caddy for the drive out of the defunct computer and copied them to my standby machine. I don't know if you have one but they are quite cheap.

Do you know why Cannon Hill Park Station is in the park I thought it might have had something to do with the trams or model railway?
Last edited by a moderator: Aug 26, 2016

Staff member
Hi Audrey: Perhaps the Friends of Cannon Hill Park might be able to help with info:

Just where is this station you refer to located in the park. Is it by the putting green. If so then I think you might be referring to the station for this train.

You are right. It is the station for the Noddy train as I call it.

Do any of you out there have information on the Nature Centre from when it opened up till today
Any photographs would be great
I remember going to the Radio Roadshows in the Park when I was a child. used to skip off school
to go and see the shows.
T

I remember the tulip festival at cannon hill park ,as kids we used to wade across the culvert and sneak in without paying not much money about in those day,s .
they used to have the military their and all kinds of different show,s and a big fun fair it used to be great i don,t think they have it now .
Good old day,s
A

HI GUYS
Yes i agree with mewbla there was a very big hot house wherethey grew bannanas
could anybody confirm whether or not that is the case today
is it still there and is the bannanas still growing there
i promise not to scrump them , by the way can some-one tell me what on earth are those big flats or offices they have built along side the park is it to do with the police or private accomodation for students
or for the police traing purposes ,
best wishes Astonian ;;;

hi al
I think the memories we older ones have of these parks and the lickey's and sutton park ect, is that working people in the main in the 40's/50's didn't have much in the way of money and not many had TV's or car's so these places became places of escape and refuge from a rather grey and dull post war economy. I don't know wether any others have these type of memories but for me when I think back the sun was always shining the weather was warm and mom and dad were always smiling. I am sure the reality was different but I cannot recall I now long for those long far away summers when we were all happy and healthy.
paul

I remember the many hours I spent as a child playing down Cannon Hill Park, and up at Donkey's Hollow at the back of the park. The old paddling pool and the river Rea and the Bournbrook was also a much visited venue. Though I have to say that we spent more time in the River Rea in the deepest part a little way up from where the two streams were joined and culvert ed.

The paddling pool with its murky brown water could be dangerous what with all the broken bottles and whatever that used to get throw in there it was never safe to ender without wearing some sort of foot covering.

I was down at Cannon Hill earlier this year, and I see that they are still waiting for the Golden Lion to fall down before they attempt to do anything decisive about it.

We also popped into the cafeteria, and while I agree it was busy we were told (after taking our money) that there would be a 20 minute wait for our sandwiches, but after an hour wait we got up and left. I would have remonstrated with them but my wife who is as timid as a mouse wouldn't hear of it.

But after my little grumble the park itself is looking as wonderful as ever.

Wasn't sure what this was used for though, other than the tourist road train in the park. 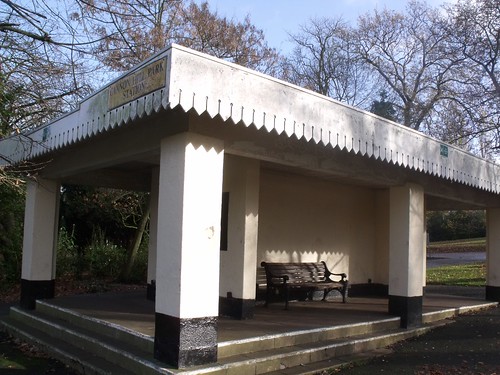 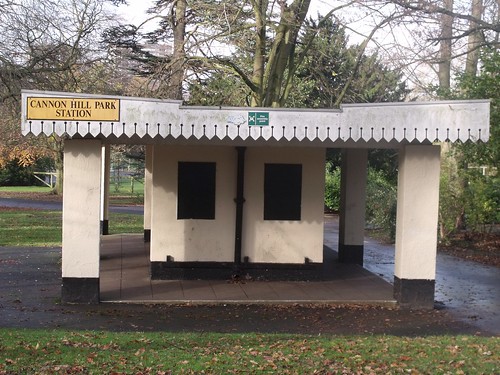 As far as my memory goes back it has always been a shelter, but in recent years it has been utilised for the little electric train that takes the children (of all ages) for a ride around the park.

Has anyone got photos of the hot house in cannon hill park, I need these for a Fine Art degree project please?

If you mean the old hot house that has gone now, then I have this very poor one, but I feel certain there must be better ones about, good luck with your project.

They are supposed to be returning the Golden Lion to Deritend eventually, but I doubt it will ever make it. It has no protection from the elements at all and the scaffold is not really supporting the building it is more protection for the public so that they don't get sued. I don't think that exposed to the elements as it is that it will get through many more winters especially if they are hard winters.

Phil, So sorry I got the area wrong, I am under the impression that if it is returned to Deritend that it will be standing on the opposite side of the road to where it was originally.
It would be so wonderful if it was reclaimed in all its former glory. such a pity that some of the other building are lost in time.

Do you know the earlist memories I have is of my dad pushing me around cannon hill park lake in a pushchair and the sound of the peacocks, this would have been around 1949/50
paul

Digbeth, Deritend, Bordesley, such a short stretch of road going through three different areas. It was always Digbeth to me for the whole length of it until I was well out of my youth, and I still think of it that way today. Does anybody know where the changes occur because I certainly don't.