Radiorails said:
Nick, the 85 was an Exeter to Crediton route, which ran in conjunction with Exeter Corporation. when it existed.
Stagecoach Devon route 85 operates in North Devon now.
The original DG routes, Torquay to Exeter, from memory were 1, which went via Newton Abbot and Chudleigh and 2 which went via Teignmouth and Dawlish. However, even with car usage Stagecoach have managed to redevelop much of their routes.
I have to admit that owning a car since 1957 I have rarely used buses.
Click to expand...

Alan we moved to Torquay in 2004 then returned to Cornwall in 2009. I seem to remember the 85 direct to Exeter stopped in 2009. We used it a few times as it was far cheaper than using the car also far less hastle.

Thamesdown Transport are to name their new E200MMCs after class 52s:
The Class 52 was a Western Region diesel locomotive, 74 in all, some built at Swindon (hence the choice of name) and others at Crewe. All has Western as the first of two names. I could not find a colour picture of these locomotives in Birmingham, just b and w. This one is Exeter. The 52's were ( seven are preserved) were elegant to my mind. 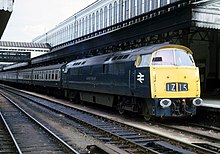