i am looking for information regarding the bob wilsons fun fair
can anybody throw some light on this wilsons fair ground when did they ever start this fair
Astonian,,
N

Think they were the fair that visited Perry Barr park every year. This would have been at least from the late fifties as I tried to get a job helping on the rifle range, these were the days when 22 rifles were still allowed without a firearms license.

Good morning to you, Alan.

Earlier than that for certain. They used to visit Sparkhill Park in the late 1940s. I saw them several times before I moved to Kings Heath in 1950 and as I've mentioned elsewhere, the tune that they were forever playing was the Andrews Sisters' Money Is The Root Of All Evil. The record came out in either 1946 or 1947 according to internet sources.

They've now come into the 21st Century with a website here, but sadly it gives no historical information:-
https://www.bobwilsonfunfairs.co.uk/

It was incorporated as a limited company, Bob Wilson Funfairs Limited, with the following Directors in 1978:-
William Joseph Wilson - born February 1947
Mrs Emily Violeta Wilson (presumably his wife) - born January 1947
Robert Thomas Wilson (presumably William's brother) - born November 1958
None of these were appointed until 1991 and Robert resigned in March 2000, so presumably the business was started by their parents much earlier. The current address is given as Shipway Road, Birmingham B25.

Just in case the Moderators are getting a little tetchy, all this information is freely available on Google.

This site, although still under construction, will tell you a lot more. The Wilsons have apparently been associated with fairgrounds since the 1700s:-
https://www.wilson-history.co.uk/html/family_tree.html

When the Birmingham History Galleries first opened 5 years ago, they had a horse from a Bob Wilson carousel. 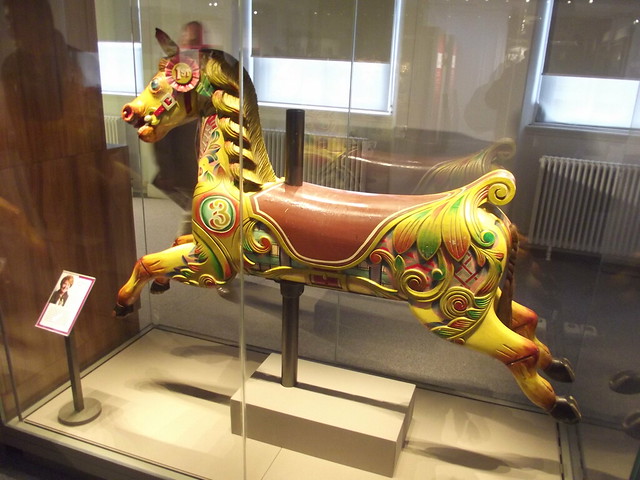 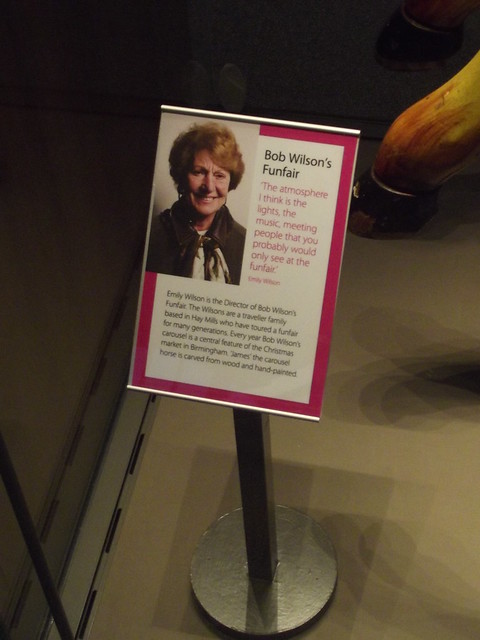 Before it was at BM & AG, it was at the Museums Collection Centre. 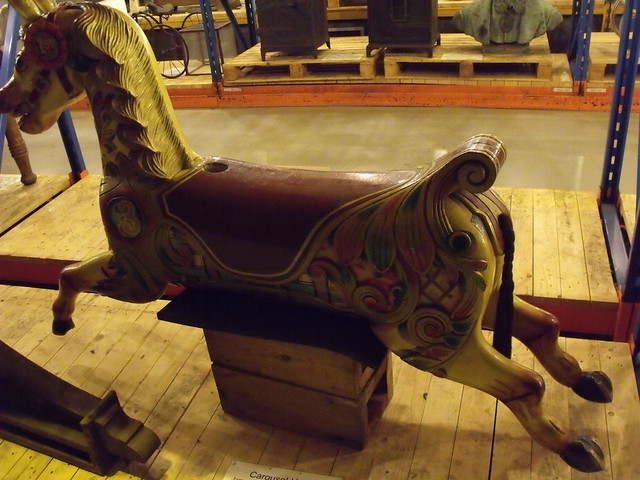 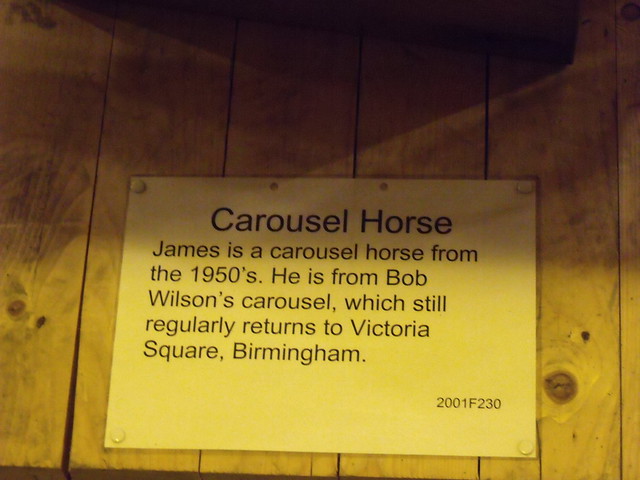 Every November to December when the Frankfurt Christmas Market is in Victoria Square, they set up one of their carousels. 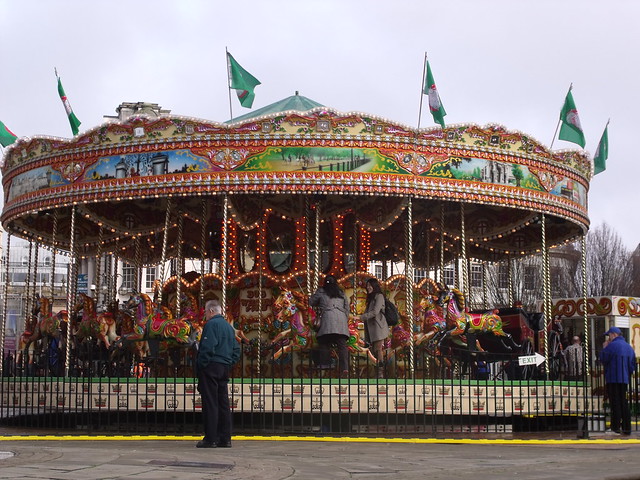 Staff member
hi alan i have moved this thread to the appropriate section of the forum..(fun fairs)

many thanks lynn and maureece for your input and lynn moving it to fun fair and also other members for there input
the reason i have asked for this is because i have been asked by my daughter to look into the history of bobs family
and there business as this old chap apparently is a church goer in is eightys and he originates from Aston
and she said he was connected to the wilsons or should i say it was his father was connected to bob wilson in there early years of 1800s
many thanks to you all Alan,, Astonian,,,,

This was always very fascinating, Alan, and when I saw Ell's pictures I wondered who actually manufactured and painted those lovely horses. As a child in Sparkhill Park I used to love wandering around the fair, but I would never go on the rides and won't to this day - they make me feel sick and giddy. Also one or two of the youths they used to employ were somewhat dubious and unfriendly, but all part of life's rich pattern, as they say.

Hi Maurice
many thanks for coming back to me on this topic of the fair,after reading your story ,you got me thinking back in time myself
as when i was a kid ,and when the fair to the serpentine and my mother was in hospital having another baby
and i used to stray off down to the serpentine grounds to the fair
i was only a nipper in short trousers never went home from school but nipp down the fair at closeing time
i would stay till dark and i was fasicated by the bright lights and the music but especialy the horses
you are on about well i used to watch the older lads stand around the ride and when it started to turn the older lads would run towards it and jump on the platforms and grabb a barr eventual i thought to myself copy them and try it
but unfortunelately for me when i ran to wards it there was a big kid coming around with his legs swinging out
and of course we coglided into each other but his feet caught me in the stomach and winded me onto the ground
people gathered around and picked me up by this time it was dark and i was abit dazes
but fortuneately for me a grown up friend of my second oldest brother was there and walked me around the fair
his name was raymond he himself was a neibour five doors from ours
we went over the far sign by the wall of death there was a side stall which was the throw a ball into a bucket
raymond said have a go alan i said i aint got no money so he said here is a penny get a ball
when i got the ball , raymond said throw gently to the top side of the bucket it will go in
so as luck had it i done what he said and lord and behold i won a coconut and took it home
my dad was going crazy and shout at me asked where had i been all day from school
i told him and said about raymond and the coconut he sent me to bed with no supper
but getting back on track maurice this guy whom spoke with my daughter said that his grand father or is father
set up the fair first and sold the business to bob wilson
unfortunelately i cannot name this person because he is still alive today plus the wisons are still around the second or third generation
of the wilsons family whom i did get to know many years later in my older years of life
i got to know bobby and queenie wilson she done the horse round and the walzers
and young bobby shared his part by doing the bumping cars dogems in the afternoons and bob senior always done the cars himself
when bob died young bob took over with his mom
At one time in my life duringmy youth did go out with a fir ground girl i was about seventeen years old
and she was the one girl sitting in a side show called the spotted girl
but some of them fairground guys did not like they was getting restless and giving verbal i used to meet after the fair was closed for a drink
i used to live across the road from shipway road where they stayed outof season youg bobbby had built a huge white house
on the grounds down shipway road it looked like Dallace on the TV
Take care maurice best wishes your friend Alan,, Astonian,,,

An interesting story, Alan, and you're right, it was a very close family and I think most of the people working there were related in some way and very protective of the other members of the family and the business. I was about 12 years old the last time I went and didn't understand all this. To me and my friends they were just gypsies and we didn't know any difference. Almost midnight here in Crete, so I will bid you a goodnight, Alan, and sleep well.

I can remember in the late 40s and into the 50s the the fun fair used to travel around all the old bomb pecks every year, would that of been the same fair?.

This was Bob Wilson's Fun Fair at Swanshurst Park during June 2014. View from the 11C bus. 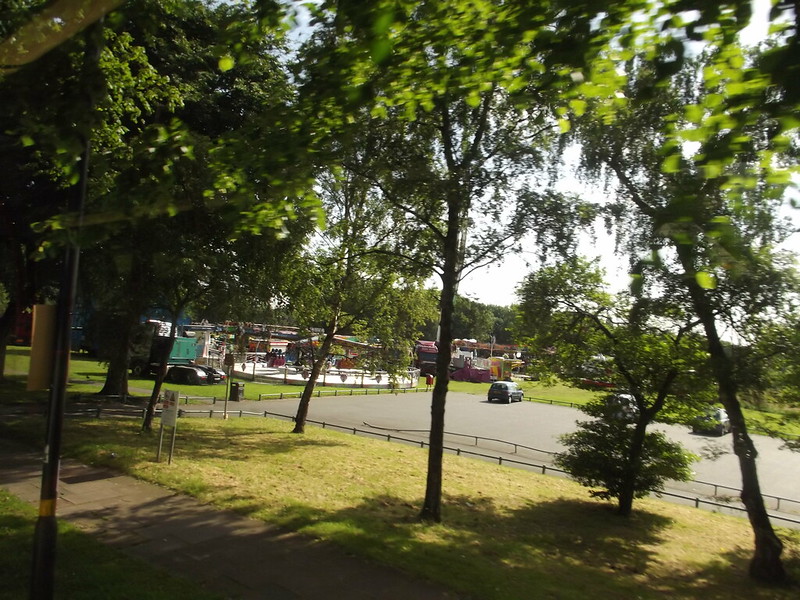 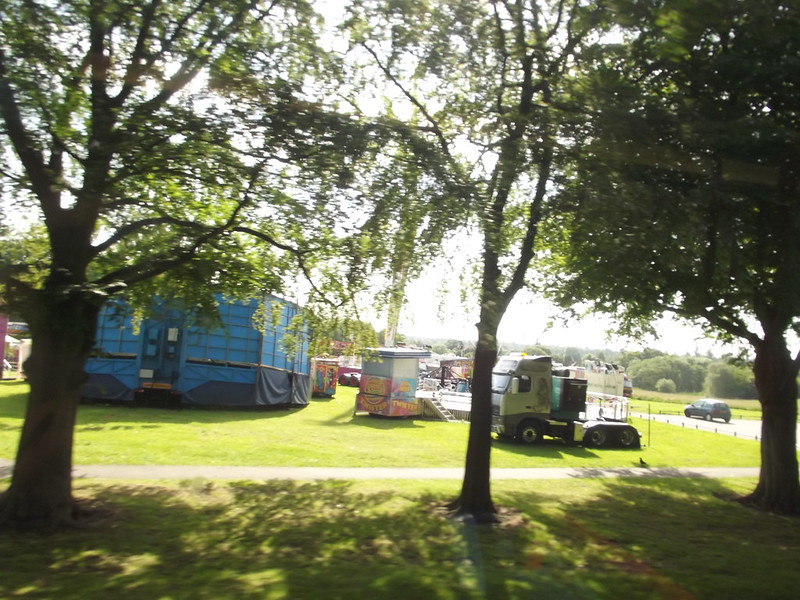 hi charliewag
In answer to your question it could have been this one of bob wilsons, or one of the other two fairs that started many years
ago there was thre other fairs going back to the early days where they used to set up and perform on bomb pecks
and by the way may i say i have not heard that expression for donkeys years
the other two cmes to my mind was stevens,s fair , firstly i think followed by the run for your money competion was pat collins,s
fair competing with old bob wilson,s over the centrys they both brought big machines to there fair to wo the punters
but personaly pat collins could not match up to old bob and queenie wilsons fair
the conversation i have had yesterday from my daughter that this old fella whom is a church goer and honest speaking
told her that our old bob wilson which would have been the father of old bob senior father whom brought
the land from his grand father told her that his grand father sold the land to bob wilson and some rides if you get the drift
of what I am saying and that when he sold it there was a compulry order on the land
and old bob found shipway road hay mills some huge land and thats where they stayed for decades when out of season they closed
down the fair and traveling until about may then they move around again and come back to shipway road

It looks a bit more respectable than it did in the late 1940s !!

Hay Mills was regularly visited by Bob Wilsons fair in the late 40s and 50s. It was sited on a plot of land at the end of Shipway road. I think i'm right in saying that Bob Wilson built a mansion on the site sometime in the 60s

It looks a bit more respectable than it did in the late 1940s !!

They take over the field in which ever park or recreation ground they are using. And also put signs in the area on lampposts. But that includes circuses and other fun fair groups. 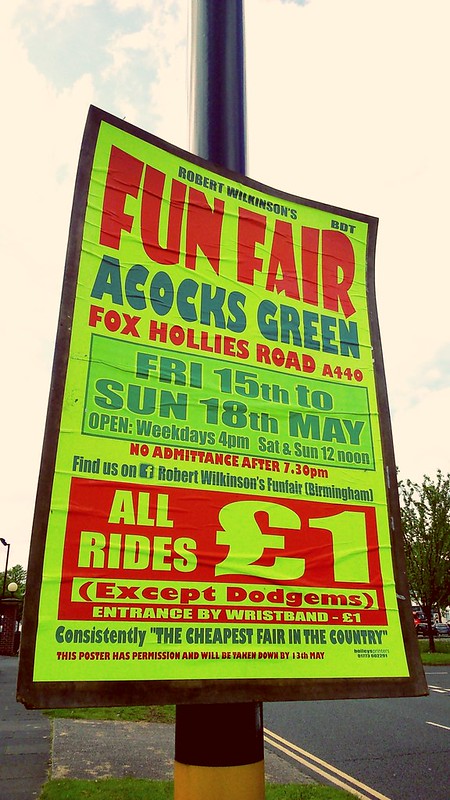 Last year was a fun fair at Edgbaston Cricket Ground (not sure if that was Robert Wilkinson's or not). 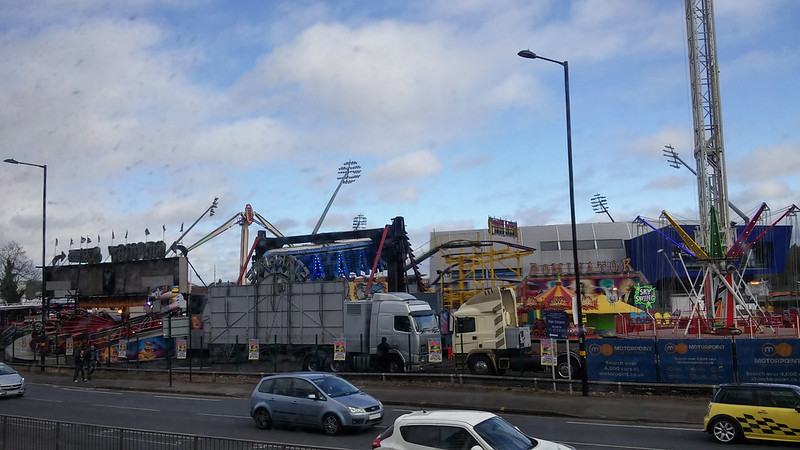 I think it was Bob Wilsons funfair that used to come to Pype Hayes park when we lived in the prefab. It was great because I could watch all the rides being built from the back garden.
A

sospiri said:
This was always very fascinating, Alan, and when I saw Ell's pictures I wondered who actually manufactured and painted those lovely horses. As a child in Sparkhill Park I used to love wandering around the fair, but I would never go on the rides and won't to this day - they make me feel sick and giddy. Also one or two of the youths they used to employ were somewhat dubious and unfriendly, but all part of life's rich pattern, as they say.

Hi Maurice,
I am new to the forum and I joined because I wanted to learn more about Wilson's Fun Fairs. I was told just yesterday that one of my uncles, James Henry Higgins, from Redditch was employed by Wilson's to paint the carousels and the horses. I notice that the horse in the museum was called James. Quite a coincidence.

Morturn said:
I love fun fair art and signwriting some of it is absolutely stunning
Click to expand...

Carters offer signwriting courses for anyone interested in the art

Traditional skills in a digital age. Join us on a course or tour, or print out a fun activity for kids at home or at the fair.