Rosie,
I think you will find that the office staff had to count the clippings saved in the machine. It was a method of preventing fraud and had to tally with the waybill that the conductor recorded his ticket issues upon.

The ticket illustrated by John is a very low value for an adult ticket, Childrens had a C over printed in them and workmens (only issued at certain times of day) had a W overprint. Maybe there were others, but I never saw them. I collected these type of tickets but of course the more modern types issued from machines, rather than ticket racks, were of no interest whatever.
R

Thanks Alan, That must have been a tedious job! I have often wondered if it was true. I live and learn!!
rosie.

Ticket clippings were sorted by a team of girls at the Ticket Audit office attached to Hockley Garage. This was where new ticket stocks were held for distribution to the garages and survived into the days of the ticket rolls used in the Ultimate ticket machines that replaced the Bell Punch rack tickets. By the time Ultimate machines finished with the end of conductor operation, Birmingham City Transport had been absorbed by the West Midlands Passenger Transport Executive (WMPTE). Until decimalisaton stocks of redundant Bell Punch tickets were held by Ticket Audit 'in case of emergency'. Decimal currency rendered them obsolete overnight.
G

Please can anyone help me?
My uncle told me that his grandfather (my Great Grandfather) used to walk from the trams to his Aunts farm in Middleton. I have recently tracked down the OWEN family to the farm - ALLEN END FARM in Middleton which is not far from WALMLEY, Sutton Coldfield. This would be in the early 1880's I assume, as Gt Grandfather born 1866 so plus say 15years maybe! Would anyone know where the trams started and where they ended to enable him to get to the farm. Were there trams up the Tyburn Road? Up Eachelhurst Road to Walmley? Any help would be much appreciated. Georgie
G

Hi Lloyd... in the Tram photo "The Muckman" was the Erdington Arms Thread Birmingham Trams #575 If that is Gravelly Hill that the tram car is coming down... is that The Tyburn Road off to the right? Do you know where the trams going along The Tyburn Road went to? Terminus? Did they go as far as Chester Road/Pype Hayes maybe? Could they have gone up Eachelhurst Road to Walmley?
I am trying to find out how my Gt Grandfather would get from Aston, Birmingham to Middleton, which is Near Walmley in Sutton Coldfield in the early 1880's. My uncle told me that his grandfather born in 1866 (plus about 15 years =1881) would walk from the trams to his Aunts farm in Middleton. Any help would be appreciated... Georgie Staff member
Sorry Georgie, did not notice the date you required the information for. The map is for the mechanical trams, which were much later in those areas

Is there a list of all the Birmingham tram routes, and the fare prices?

I am sure I , or others, have posted this before. There is a lot to read in this thread and a search here and on the web will produce more facts.

dontheturner said:
Is there a list of all the Birmingham tram routes, and the fare prices?
Click to expand...

Hi Can't help with fares these are the tram routes & Depot's, if you require anymore info just ask.
Regards Ray

Hi,
My grandfather Fred Gilks, worked for the BCT from 1911 to 1951: first driving trams, and then trolley buses. He was asked if he would postpone retirement so that he could drive the very last trolley bus on the Coventry Road route in July 1951. He was delighted to be asked, and I have looked on the forum for photos of the occasion, but being new to this might not have looked in the right place.If there are any I would love to see them.

Roy, Welcome to the Forum. If you type Trolley Bus into the blank white space at the right hand end of the blue line near the top of the page you will see many references on the Forum to Trolley Buses. We do not seem to have a specific thread for Trolley Buses as most of the references seem to be on Tram threads.
D

Thanks to oldMohawk, and Peter Walker For the points changing answer, I will try to get to a Tram museum for more info.
Could I ask motorman-mike( being a newbie) how to see that photo of 798-789 on route 10?

DavidGrain said:
Roy, Welcome to the Forum. If you type Trolley Bus into the blank white space at the right hand end of the blue line near the top of the page you will see many references on the Forum to Trolley Buses. We do not seem to have a specific thread for Trolley Buses as most of the references seem to be on Tram threads.
Click to expand...

Overhead line repairs but the workmen are looking down at something.

There is a lot that can be deduced from this picture in Post 596, the only thing I do not know is the date. This makes some comments conjecture - which I will draw attention to.
Car 825 is seen here, in Pebble Mill Road I am sure either turning from it into Pershore Road or from Bristol Road. I believe it is the latter. The tram was built 1928/9 and was the last batch of trams built for the city (812 - 841). Just the two experimental lightweight cars (842/3) were built afterwards. They all survived until 1952 with the exception of 821 which came to grief on Breedon Bridge, Lifford on 26th. October, 1942. The car was unattended, the screw brake not applied, just the air brake which system leaked and allowed the tram to become a runaway, subsequently overturning on the curve. These cars were always based at Cotteridge depot.
Due to restrictions in the Selly Oak depot in the months prior to closure of the 36 Cotteridge, 70 Rednal, 71 Rubery and 72 Longbridge routes trams were stored on the outbound (Bristol Road to Pershore Road) track. This was controlled by lights as there was now only one track available. Cross overs were installed, with the attendant overhead wiring, at each on of the tracks in Pebble Mill Road.
The overhead wiring inspection being made might be simply routine or necessary maintenance. It could also be (conjecture) connected with the crossovers mentioned earlier in this post.

Now to the overhead maintenance vehicle AOH 7. This was one of five AEC Mercury vehicles purchased in 1935. AOH 7 and three others were scrapped in 1954 being surplus to requirements - the city no longer had trams or trolleybuses. The remaining two went to Walsall corporation who still operated trolleybuses until the WMPTE put the kibosh on them.

Posted this on the Facebook group and someone said that it was a tram terminus. 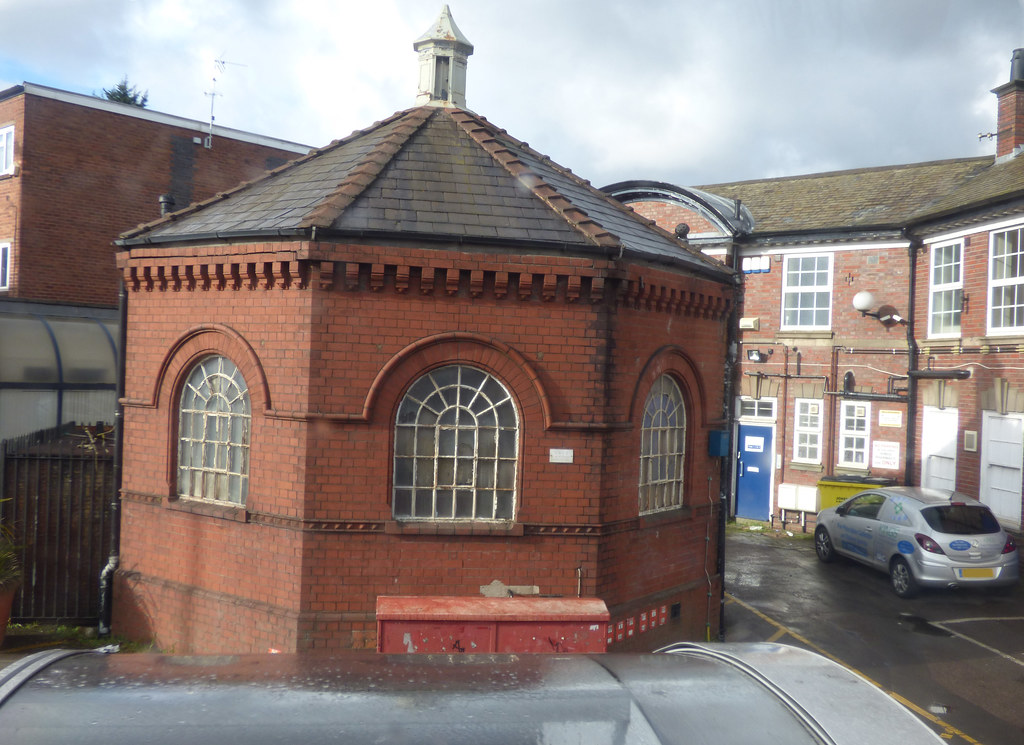 Its a gas governor house. There are a few of these around the city, but this one is unusual in its shape. There was one at the Cross Ways in Perry Common and another behind the loos at the Yenton.