hi viv
satorial shops was a mens clotheing shops they had one right on the corner
of park rd aston cross facing the old aston cross big clock and down below ground toilets that used to be there and i think it was the george pub on the corner
directly facing them and of course the very corner next to HP sauce factory
in the fiftys our grand mother berta victoria jelf whom was a stage dancer
around the thearters and associated with billy coton and sandy powell and wee georgie wood took me and my two brothers to get kitted out and bought us our first pair of long trousers and shirts and pull overs in the early fiftys
at the Aston cross shop they was also around the city centre ;
enjoy today viv ; its gonna be a hot one ; best wishes Astonian; Alan;;
V

Staff member
Thanks Mike. Did also wonder if theatregoing went into decline for a while too, especially with competition from cinemas. The promise of panoramic screens must have been difficult to compete with.

Thanks Alan. Sartorial seems to be a word that's dropped from use today. I bet if you asked anyone under the age of 30 what it meant most wouldn't have clue. It's a word that I always remembered being used in a very positive way like 'sartorial elegance'. So you must have looked pretty smart when you'd been kitted out!

Now here's another word you mentioned which hasn't had too much use of late either 'SUN'! Shall take your advice Alan - off for a nice cuppa and a biscuit in the garden........ Viv.
M

Leon Salberg was talking to another Theatre Owner.. About Walter Jeffs Opening at the Curzon Hall. for Films The other Owner commented that its somewhere for the quese to go to when they filled... Leon commented back that they will end up taking the Cinemas Over flows..

It must be noted that Leon Salberg with his Freind Sir Sidney Clifft controlled over 60 cinemas around the country (Cinema Propritors Ltd.,) (The Clifton Circuit) (plus 6 Cliftons Branded as Odeons) There lies another tale... Hmm I think I must get down and write the real story of went on behind the scenes... Makes "The Godfater seem like Noddy in Toytown.. )

There's currently a new exhibition on at The Gallery at the Library of Birmingham and they have two items called "The Theatre Royal Plaques". One is of William Shakespeare, the other is of David Garrick. They were rescued when the theatre was demolished in 1956. 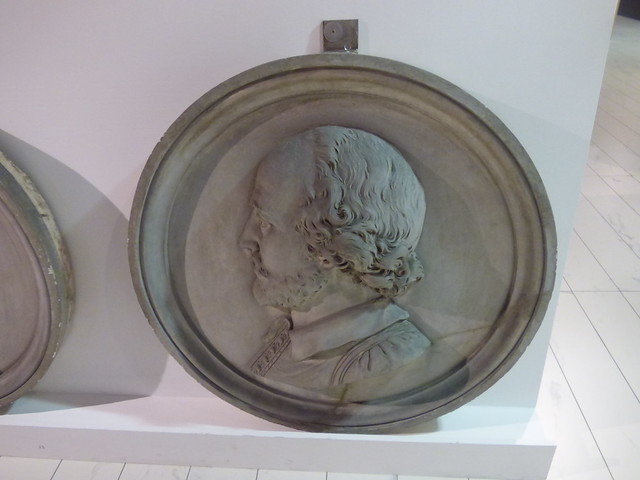 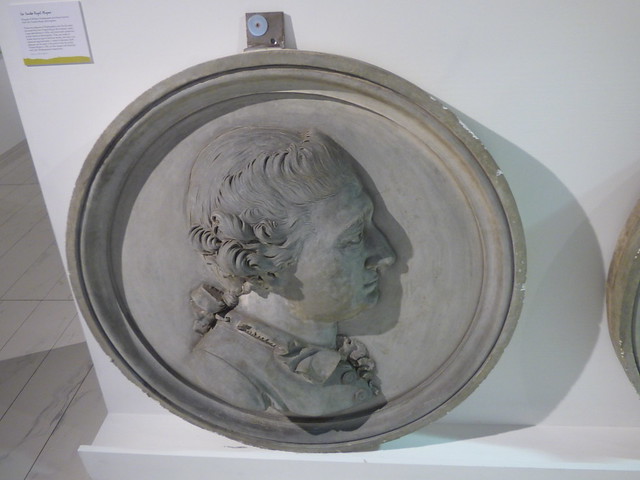 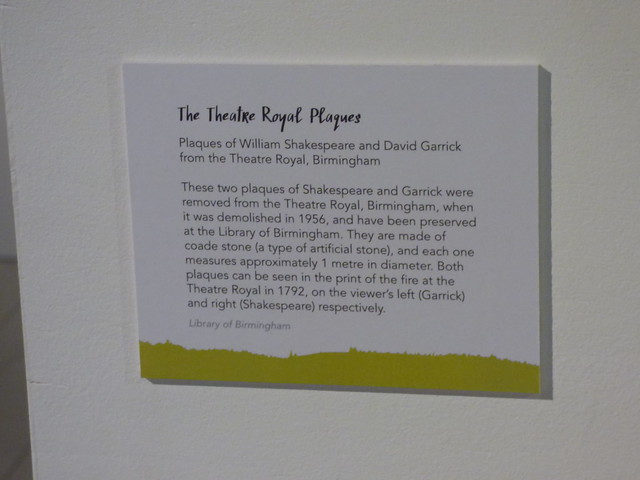 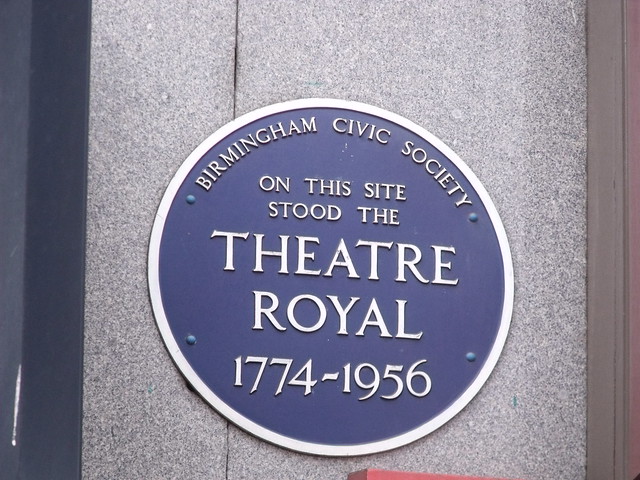 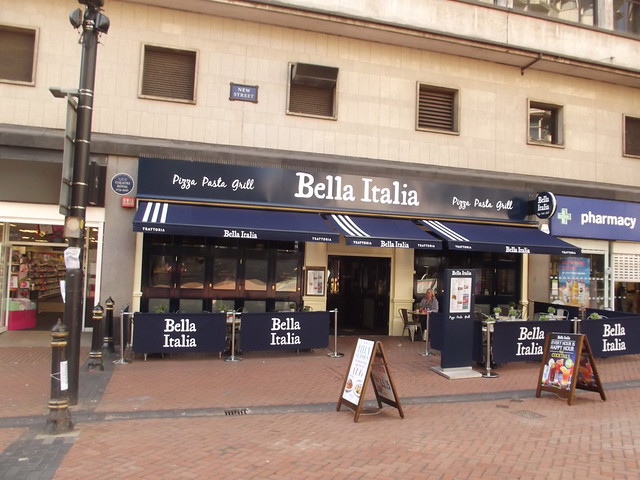 Remember seeing Max Bygraves as Buttons in Cinderella at Theatre Royal, maybe 1952 not sure.
V

Staff member
A drawing of the fire at the original theatre. A loss to the city, but on a humorous note, see how earnestly people are rescuing barrels of booze from the building! I think the bar (in the lower right section of the building) was the Shakespeare (?) - ties in nicely with one of the old plaques. The two plaques can been seen fixed on the original building within the first floor window arches. Viv.

Was that what the sign at the Library was referring to then Viv. Thanks for that.
V

Staff member
There was later a Shakespeare Restaurant (with bar in the vestibule) described as "next to the Theatre Royal" Below is advert from 150 years ago. Don't know if this evre held the plaques, but it might have done

Did The Shakespeare pub on Lower Temple Street have anything to do with the theatre? 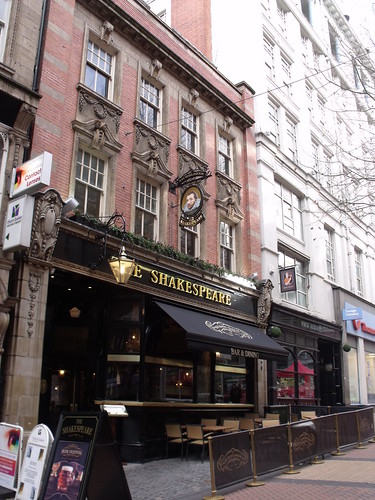 And in 2010 before they redecorated it 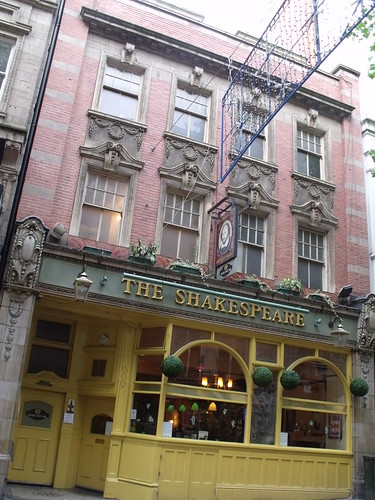 Staff member
According to McKenna the shakespeare was originally a narrow three story Georgian house and is shown as a pub like this in a drawing by Tarlington in 1870 before it was rebuilt. He mentions no connection to the Theatre Royal , though name probably came from its closeness to the theatre. It is difficult to follow exactly whether it was called that is early years, as it is not named in directories and Loer Temple st once ran down further before the station was built

The Theatre Royal brings back memories of The Student Prince, I was very young when Mom took me to see that show, it left such an impression on me. Later in my life my father in law would play his piano and sing to us, he found the Student Prince late in his life and he too loved it. I think we still have his sheet music stored away.

It was such a sad day when the old theatre was buldozed. Thanks for this lovely post and for sharing all the stories.
V

Staff member
When the Charles Dickens' Amateur Theatrical Company toured the provinces in June 1848, Dickens prepared a handbill and sample ticket to be printed for the Birmingham performances at the Theatre Royal in New Street. The purpose of the tour was to raise funds to support the curateship of Shakespeare's Stratford home. The handbill and ticket are now held by the Cadbury Research Library. A nice piece of history linking Dickens, Shakespeare's home and Birmingham! The details are below. Viv.

My only visit to the Theatre Royal wasn't for classic theatre it was for a performance by Frankie Laine in the early 1950s. I remember looking down from high up in the theatre at a fabulous performance sounding just like his records.
V

Staff member
Performance advertising, Theatre Royal style. This ad would certainly have appealed to me as a child. Although their faces look a bit freaky. Viv.

oldMohawk said:
My only visit to the Theatre Royal wasn't for classic theatre it was for a performance by Frankie Laine in the early 1950s. I remember looking down from high up in the theatre at a fabulous performance sounding just like his records.
Click to expand...

Staff member
These balustrades once graced the interior of the Theatre Royal. Caption below explains. Viv.

Viv, for some reason they remind me of the Ideal Homes Exhibition at Bingley Hall. Did they have them there?
V

Staff member
Don't know Lady P. The Bushall-Matthews acquired them when the Theatre was demolished to make way for the Woolworth's building on New Street. They were balustrades from stall boxes. Viv.
You must log in or register to reply here.
Share:
Facebook Reddit Pinterest Tumblr WhatsApp Email Share Link
Top