Thank you Rosie, that is great news, I hope they will and continue to show films there. Regards Paul Stacey

Plans have been unveiled by a "National Cinema Operator" to convert the ROYALTY grade II listed building into a 3 screen cinema, with one large and two smaller auditoria. It opened in 1930 films ceased 1963 then it went over to bingo which finished around 2012.

on my first leave from the army, I passed the "Royalty", and saw for the first time the BINGO, adverts and neon lights, such a sad end for a much loved institution, still I am sure that it happened else where, many times. Paul

Byron is now at 92-93 New Street which was the ABC Cinema on the corner of Ethel Street. Previously Cashino was at this corner.
Cinema from 1896 to 1983. First built as a Masonic Hall. https://cinematreasures.org/theaters/9313 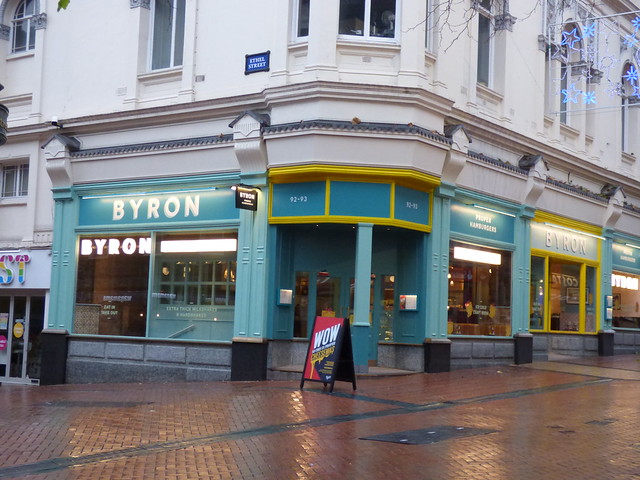 I was trying to count up the number of Cinemas operating in B'ham city centre and within walking distance before I left in 1961. The Odeon, Gaumont, Forum, West End, Futurist, Scala, News Theatre, Tatler, and, in walking distance, Gaiety (Coleshill Street), Cinephone and the Bristol. I know the Odeon and Tatler (Electric) are still functioning but what other Cinemas have opened in the ensuing years. I've never been back to Brum as I've neither family or friends there. I might have left one or two out. Can someone enlighten me?

The Odeon on New Street and The Electric on Station Street are the only old ones left (as you said).

There used to be an Odeon Queensway - Scala Superama Cinema and the Odeon near Holloway Circus in the Scala Building. It opened in 1964 and closed in 1988.

Was at one point a cinema at The Arcadian in the Chinese Quarter (at various times it was MGM Cinema, Virgin Cinema, and UGC Cinema) but eventually closed down (has since been rebuilt as apartments near The Arcadian). It opened in 1991 and closed in 2003.

The main "city centre" cinemas now are over in Five Ways. Cineworld at the top end of Broad Street (was a UGC) and the other Odeon at Broadway Plaza (was previously AMC). But these are modern multiplexes that opened in the 200os.

A more recent one Everyman Cinema opened at The Mailbox in 2015 (it is near Gas Street Basin).

Some of it depends on what you think of as walking distance but I think you've missed the ABC New Street from your old list and a new list might include the Mockingbird at the Custard Factory.
H

Thanks Wam for your reply. The ABC New Street was The Forum. Don't know anything about the Mockingbird as I've not seen the modern Birmingham although, strangely enough, I shall be spending a day there shortly so I may be able to catch up. Ellbrown, many thanks for the link to Cinematreasures. I was aware of the site but not of the Birmingham Cinema pages which I've spent a very happy hour viewing. I'd forgotten the Scala Superama. I went to see 'Fall of the Roman Empire there and very nice it was too. The Cinematreasures page reveals just how many Cinemas have gone but it's not surprising when you can have a screen of any size you like at home with surround sound and home convieniences to hand at any time. In the 50's my Mom, sister and I went to the picures every Tuesday and Saturday. It was a way of life and something we didn't want to miss, but when t.v. came into the house I was left to go to a cinema (The Picture House, Harborne) with a declining audience. It was heartbreaking. Closure was inevitable. They were such happy times and I only wish someone had taken a photo of the inside of the old place.

No problem. The multiplexes today probably make more money than the old one screen cinemas ever did! These days a film in 2D may cost anywhere between £6 and £10. Even more if you see them in 3D, IMAX, iSense, 4DX etc.

Most of those old cinemas were gone before my time. The ones that survived at one point became bingo halls or conference suites.

You should see the one in Kings Heath (The Kingsway) that was gutted by fire. Hasn't been restored yet.


In Hall Green a Waitrose stands on the site of a former cinema. Over in Edgbaston at the top of the Bristol Road is a McDonald's near Belgrave Middleway and Lee Bank Middleway.
W

Taking inflation into account and the multiple screen cinemas increased capacity, I wouldn't be surprised to find that most modern cinemas aren't doing anything like as well as they were 40-50 years ago before the advent of home video, massive TV screens and High Definition transmission.
Then again, there seem to have been many waves of closures, re-fits and changes of use. A lot of cinemas died in the 60s and went over to concert halls, bingo halls, asian cinema occasionally, arts centres ... When they started closing the big ones in the 80s, there wasn't that much they could do with them. Nowadays you get cinema shows in pubs, cafes and nightclubs and short "festivals" in other places. Some cinemas are only cinemas part of the time.

A recent panoramic at Odeon Birmingham Broadway Plaza near Five Ways. This is on the top floor with screens 5 to 12 being up here.

They keep advertising for you to get snacks from the foyer (inflated prices) Odeon has a Costa Coffee inside.

And Cineworld on Broad Street recently got a new Starbucks.

They both have ticket machines and you can book your ticket online and collect from the cinema (or even use the QR code on your smartphone if you want to).

Of the modern multiplexes, I used to go to a UCI 8 screen cinema in Solihull. It opened in the late 1980s and was closed and later demolished after 2004.

There is now a car showroom on the site. It didn't help when Cineworld opened in Solihull Town Centre (easier to get to by bus or train).

Although the UCI had a big car park at the back. I still miss going there. Was in the Monkspath area off the Stratford Road.
H

It's surprizing to me that new multiplexes open and then, within a matter of years, disappear from the face of the earth. Can't say I much like them. Bland, little showmanship or real concern for patrons, and bare screens without curtains that somehow used to create anticipation. So different to the days when (in the big Cinemas) the manager stood in the vestibule with a welcome smile and, if he got to know you, a chat. A friend went to see the latest Star Wars film in a small local 'plex last week. The good thing was it cost just £3 (£4 at weekends). The bad was two dirty marks and a rip on the screen. No wonder there were only about 20 there!!

By the time the UCI closed the seats were a bit tatty. Although they had done up the foyer and corridor areas outside the screens. In the late '80s / early '90s a cinema usher would take you to your seat.

These days in Odeon you can sit anywhere. But with Cineworld you have to pre-select your seat (e.g. H17). I'm used to no curtain in the cinema. Only seen curtains in theatres.

You have to sit through maybe 10 to 15 minutes of adverts and trailers before the film starts.

Oh and all screens are digital not film these days (the projector). Sometimes the screen can change size, depending on the aspect ratio of the film. 1:85:1 or 2:35:1 etc.

Remember in the good old days, there was the B picture, probably an ancient western with tyre tracks in front of the posse who had guns that contained more than six bullets, then possibly a cartoon, at the bigger cinemas there would be an organist, the newsreel and then the main picture always at least 3 hours of entertainment. When we lived in Park Avenue we went to the cinema in Soho Road, went in at 630pm, saw the Glenn Miller story and a Town like Alice and came out at 1115pm. There was a news film, but there were no breaks or lights up between any of the items and there were a lot of people looking for their seats halfway through, no not even a girl with a tray. All of that for 1/9deach it would be about 1960/1961. The cinema was full as well. The great thing was you could pay a premium price to go uptown to see the latest release, wait two weeks and see it an Odeon or the local ABC or another two weeks it would be at the likes of the Star in Erdington or the cinema on Slade Road, (not the Stockland) or the Birchfield and of course on Sundays, you could catch up with very old films. Used to love the Cinephone and appear to be laid back and cool or whatever the 1960s expression was until trying to impress my new girlfriend I took her to see an American art film called Buckets of Blood, the modern jazz background music was great, the film I think it disappeared after that showing as my girlfriend almost did.

I don't think that the modern cinema is a "Patch", on the old ones, no magic, and expectation. any more. My youngest son William, takes me every year to see the latest film released, this year, (a star wars film), I cannot believe the prices, and the cost of popcorn Paul

The Electric Cinema in Station Street now has a new lease of life.
As the UK's oldest working cinema it's great to think it's managed to survive!

I used to go out with a driver called Ken delivering films to the cinemas around a wide area of the Midlands down as far as Ross on Wye. Middle of the night dashing out to the cinemas unlocking the doors, dropping off two large film cans, picking up the previous week's films and then dashing back out locking the doors and putting the films into the back of the lorry. I got stopped by a copper in Ross about 5:00 am as I walked out of the cinema with the cans in hand. He wanted to know what I was doing and where I had been? I reeled off all the names of the cinemas we had been to and he asked me why I had so many keys? I pointed out that without said keys we couldn't deliver the films! He then wanted to know if I had any proof of what I was saying? I pointed to the lorry and said "See the big white letters on the side that say FTS? It stands for Film Transport Services!" Ken got out and asked what seemed to be the trouble as we had a fair drive to get back to Brum. He wanted to look in the back so Ken opened up the back and all you could see were can after can of films that were going back to base and then back to the film companies. He mumbled about breaking in and Ken said: " If we were breaking in would we have keys and would we have left films there?" He wandered off down the street not saying another word

A Sparks said:
The Electric Cinema in Station Street now has a new lease of life.
As the UK's oldest working cinema it's great to think it's managed to survive!