Staff member
Bob, you didn't happen to get a picture of the useless scrot he set the fire, did you.?
B

I like the sign over the entrance in the first photo, "work people and goods entrance" as if they were one and the same thing.

I got some new shots of the Belmont Row works yesterday. Most of this area is now brown field sites -waiting for Eastside Locks to happen. 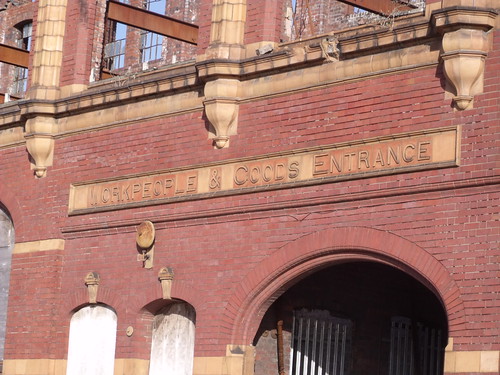 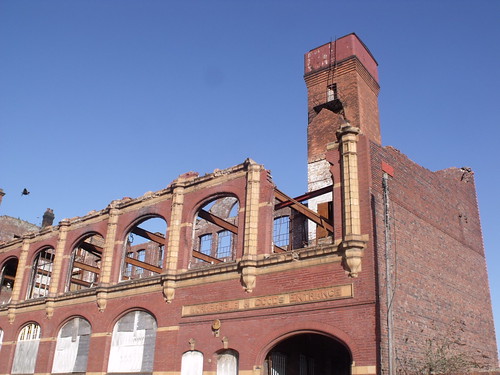 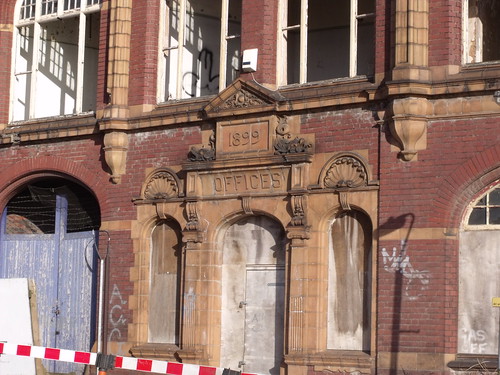 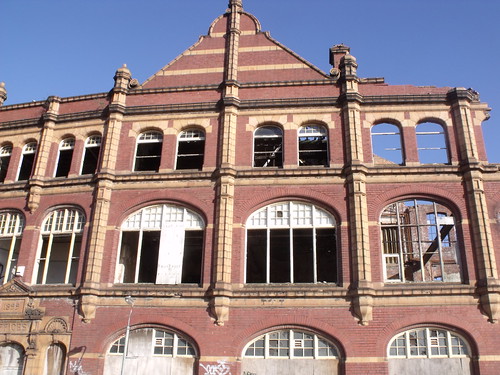 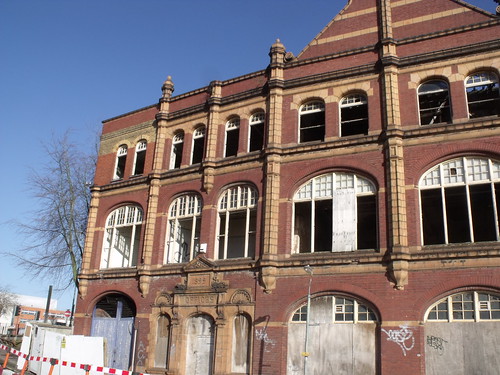 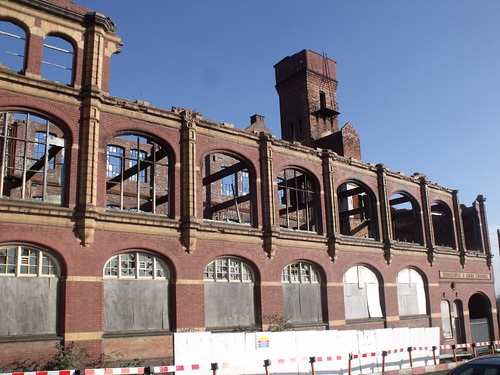 I wonder what is going to happen to this building it,s been in this state for a couple of years now are they waiting for it to fall down it was known as the Co-op Bakery when I was a kid but I don,t think they made any bread there it was more the Co-op stores although I think there were stables at the back. Dek

Historically bicycles was made there before it became a Co-op. Later pianos, then bedsteads.

It was the Headquarters for the Eccles Rubber and Cycle Company, and it housed rubber manufactory. By 1918 it was occupied by the Co-Operative Society, which used the premises to make underwear. In 1931 the factory was making pianos, and by 1941 bedsteads.
Click to expand...

This article is from 3 years ago Restoration plan agreed for historic Birmingham bicycle factory. But nothing happened since this was published.

Thanks Ellbrown although I wasn,t around in 1918 the Co-op name must have stuck with the building even though it had new owners. Dek

It could get converted into apartments.

City planners have pleaded for crumbling historic cycle factory building to be saved before it falls down.
The fire-damaged Belmont Works at Cardigan Street is one of Birmingham’s more attractive Victorian factory buildings but is scheduled for restoration as part of the Eastside Locks canalside development.
Now Birmingham’s planning committee have approved detailed designs for two office blocks – one five storey the other four – on the site as part of the canalside Eastside Locks development.
But planners have called on developer Goodman to shore up and begin restoration of the Belmont Works before it deteriorates any further.
The former factory was severely damaged in a fire in 2007 and has been a crumbling shell ever since. Goodman has previously committed to keep at least the attractive facade as part of a hotel development.
Coun Peter Douglas Osborn (Cons, Weoley) said that he welcomed office blocks and hoped that the arrival of HS2 would encourage swift development.
But he added: “The Belmont Works really does need immediate attention. It’s a beautiful building.”
He said that parts are already falling away and called on the developer to act.
Coun Paula Smith (Lib Dem, Hall Green) added: “We were told that the Belmont Works would be restored in the first tranche of development. It has not been. We need to do something quick and get it sorted.”
The Eastside Locks development will see shops, cafes, restaurants, offices, a hotel and flats built on the former industrial land off Curzon Street.
The Belmont Works, built in 1899, was the headquarters of the Eccles Rubber and Cycle Company and housed a rubber manufactory.
By 1918 it was occupied by the Co-operative Society, who used the premises to make underwear. In 1931 the factory made pianos, and by 1941 it was producing bedsteads.
Goodman development was not immediately available for comment.
Click to expand... 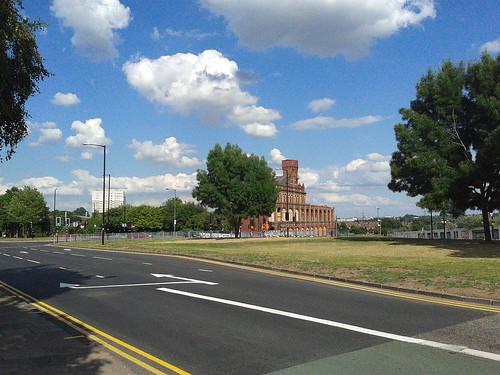 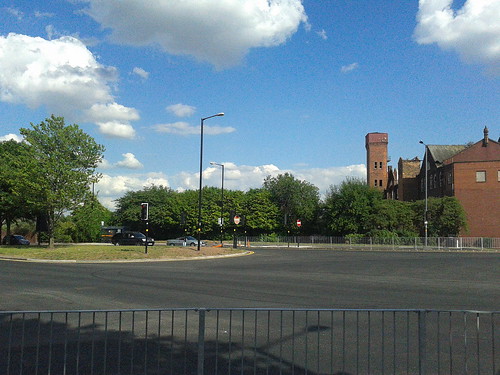 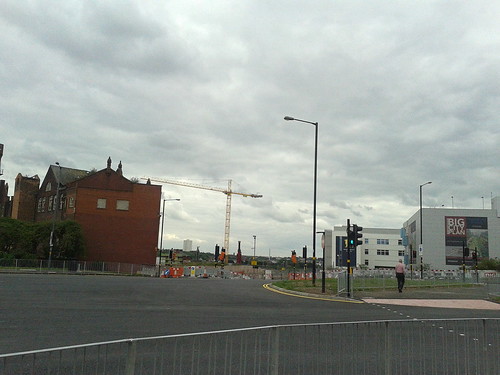 AB Row (before it was dug up) 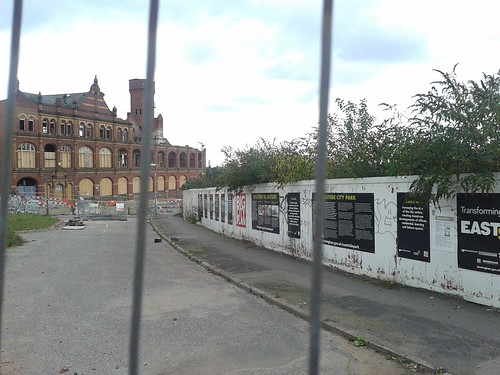 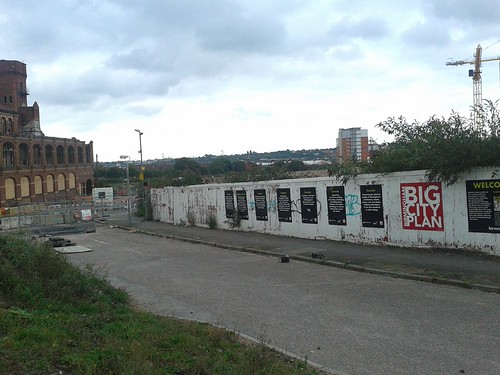 Anyone see the picture in last nights Mail ?? it said that this building is in Cardigan Street!! surely it is in Belmont Row !!or is my memory playing tricks ??

There is no doubt that the premises built for Coopers Bicycle factory was in Belmont Row, the thing is that they have altered and changed around so many of the street names in that area, it is possible that it is now called Cardigan Street

I would say it is in Belmont Row, certainly most of the building runs along Belmont Road.

As far as I know most of the street names are the same in that area, though some streets have been "lost" or shortened.

For example Nova Scotia Street went a couple of years ago when they built the Ormiston Academy in that area.

Also Gopsal St and Penn St may be soon "lost" or pedestrianized when the build the Birmingham City Phase (BCU) 2 building along Cardigan St.

Thanks Phil . it seems that even if they have kept some of the old Street names, they have slightly altered the position of many of them, but why ?? I find it more confusing than changing the names completely, It must be my age.

It is even more confusing when you knew the streets and building well, around that area they have really had a field day with the street names. I used to live a short walk away in Francis St, the original street has now gone and the bit that has been rebuilt now consists of Francis St and Henry St. It would have made more sense to call it Henry Francis St or Francis Henry St.
G


Phil said:
Cardigan Street ran from Belmont Row to Curzon Street on the opposite side of the road to the Cycle factory so in no way could it ever be classed as being on Cardigan Street.
Click to expand...

If you look at Google Maps you can clearly see the factory is where Belmont Row comes off of Cardigan St.

The Northern corner of the factory could be considered ON Cardigan St.

Another web site says it used to be the factory of the ECCLES RUBBER AND CYCLE COMPANY and the factory at that time was known as the Belmont Row Works on Cardigan Street.

See picture here showing how close it is to Cardigan St.

Sorry Guilbert, but Belmont Row used to finish at Ashted Row/ Prospect Row, and that top part behind the old Gosta Green Market was Belmont Row. Here is a bit of the early history of the building before it was taken over by the Co-op. It is listed in every copy of Kelly's as being on Belmont Row. As I have said I cannot vouch that it is still the same today, but when the building was built it was.

Photo updates from today (it rained and snowed in the morning, but by lunchtime it had stopped and the sun had come out!) 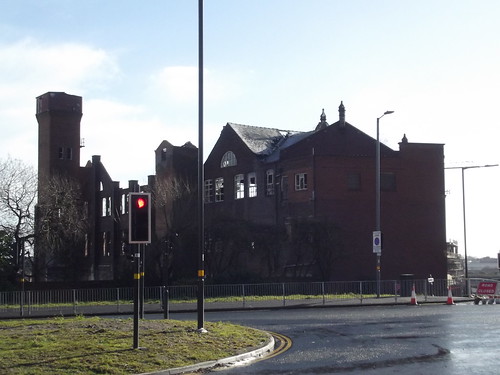 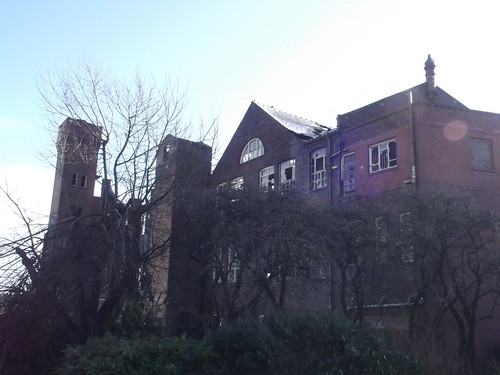 Belmont Row to the left. Cardigan Street to the right (from Jennens Road junction) 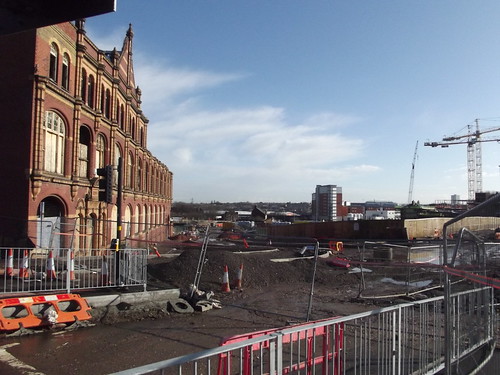 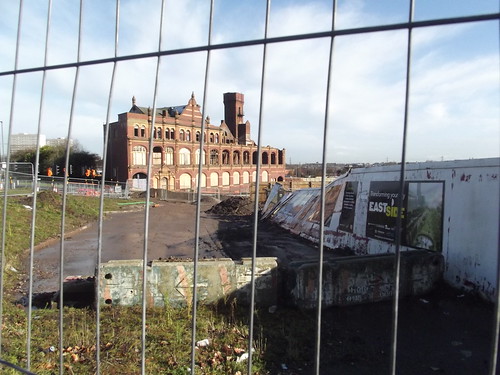