Across Birmingham on the 29A

I was in WH Smith in Solihull today and I saw a book by David Harvey called Across Birmingham on the 29A.
Most of these routes were before my time, but also mentions the former 30, 33, 90 and 91. The modern day 5 and 6.

Strange that these routes also went to Kingstanding, when the current ones pass through Hall Green on the way to Shirley and Solihull!

Thank you for bringing the book to the notice of Forum Members. The 29A (and most of the routes that used Stratford Road, both BCT and Midland Red, were well known to me up until 1954.
I have a few of the splendid books of the erstwhile BCT written by David Harvey and I look forward to getting this one.

It's looking good so far!

These days the only Cross-City services are on the train, not the bus!

The kind of bus featured in the book. Seen as a 90 during last autumns Open Day between Acocks Green and Yardley Wood bus garages. Formerly a 29 or 29A. 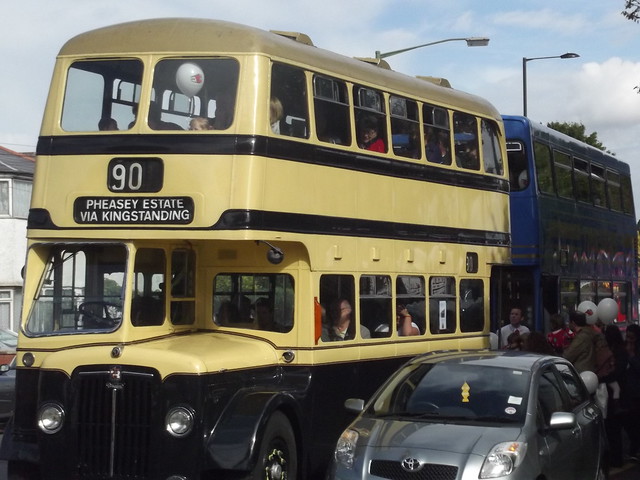 Have found several typing typos in the book! Opps!!!

Ah! well, I am more interested in the pictures that the script as I was very familiar with the route more so the souther and city part (south of Hockley). Looking at the Google map it seems to me that the route is unchanged: the bus stops seem to be pretty well were they were sixty years ago. The only section of Cole Bank Road that I recall and see is where buses use the part between the roundabout (junction with Sarehole Road) and the other roundabout (junction Wake Green Road). Cole Bank Road of course was the preserve of the Outer Circle route 11.
Two things I remember about this area. Firstly I had an uncle who lived in Swanshurst Lane, overlooking the roundabout, secondly the other was about a woman who attempted to board a 29A bus at the Bundy clock in Cole Bank Road as the bus moved off. She did not make it but clung to the vertical platform stanchion and was not noticed until the bus had navigated the island as was starting to accelerate into Sarehole Road. I believe she was in hospital for some while.

The pictures are good.

This morning I decided to walk down to Baldwins Lane. Saw the 5, but kept missing it (catching it that is). 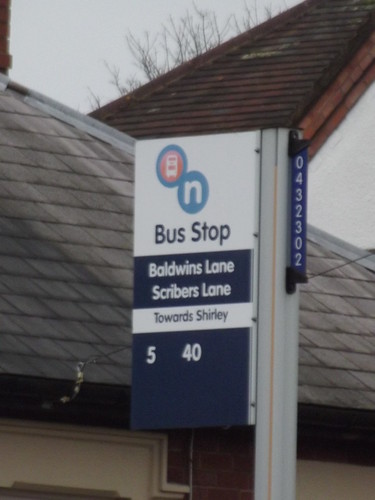 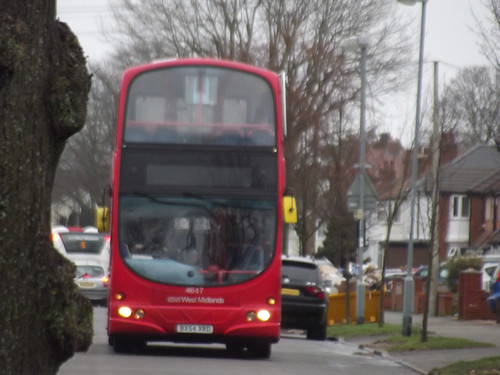 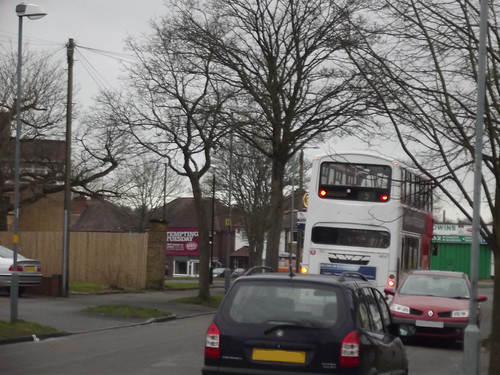 One of the photos in the book is dated 1966, the year that Baldwins Lane Service Station / Garage opened! 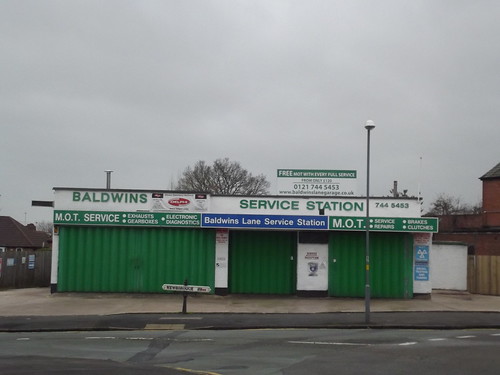 Roundabout - original terminus of the 29A. 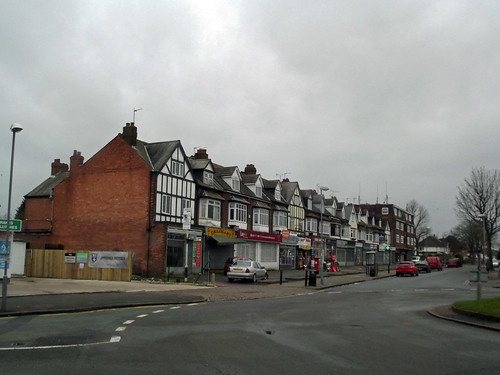 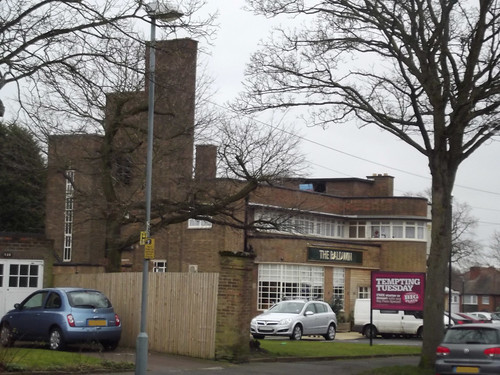 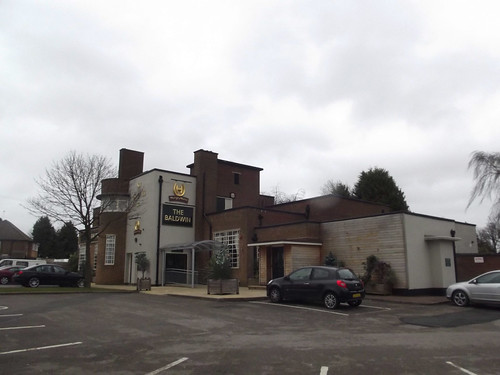 Yes the road layout of Wake Green Road, Swanshurst Lane and Cole Bank Road is pretty much the same (other than a change in street furniture). 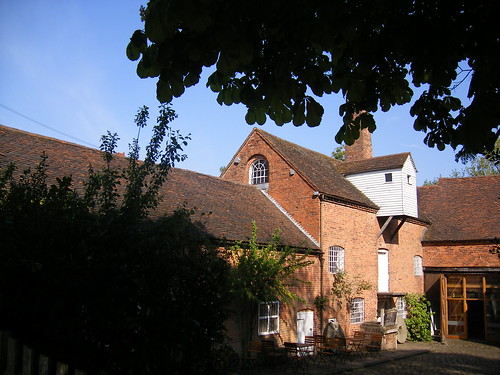 Hungry Hobbit - a cafe near the roundabout (between Wake Green Road and Swanshurst Road). 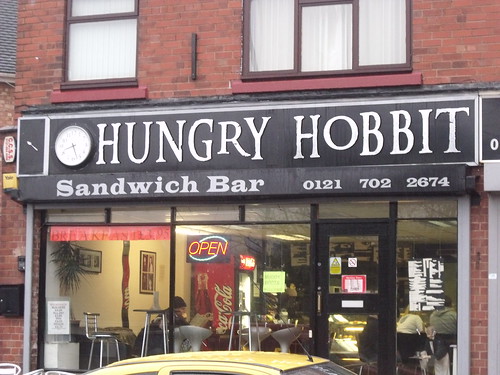 The bridge on the River Cole. View from the 5 / 11A bus stop 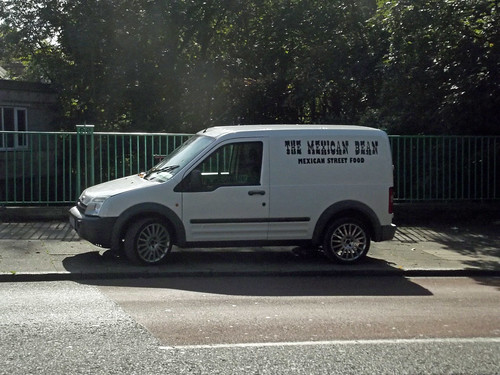 Other side of the River Cole bridge in snow 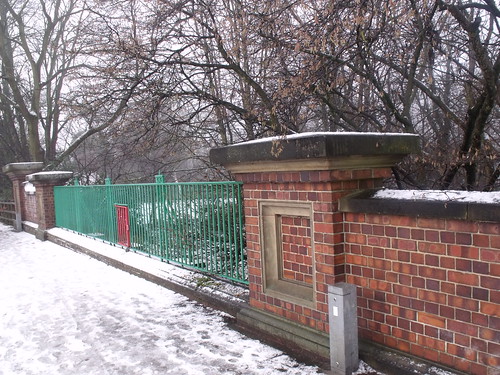 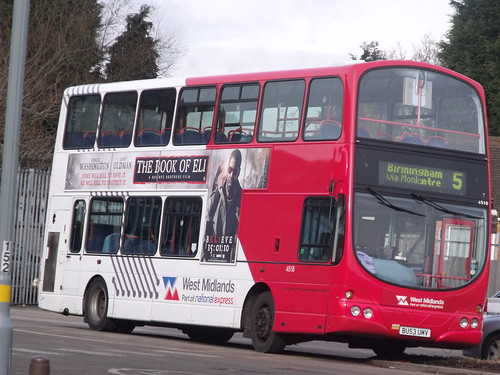 I remember the 29a at the Kingstanding end it went up and over Kettlehouse and down to the terminus at the Trees Pub on the Queslett Road.

How pleasing to see those pictures El. There are some changes at Baldwins Lane although Cole Bank Road was quite recognizeable. I guess the Bundy Clocks have gone in both locations. Sarehole Mill was very concealed from Wake Green Road when I remember it, in fact I did not know that the mill was there. I think the entrance structure to the Baldwin has spoiled a very smart building. How on earth do the planners allow it?
In one photo, of the row of shops, the one nearest to the camera was an elliptical retailer. After WW2, about 1947/8 I guess, they had a OO model which was red London Transport tube stock. I don't remember if there were two or three cars in the set. Oh! how I wanted one, but never did get one. :biggrin: In later years I did amass a large collection of HO/OO models but never had space to build my ideal set up. I sold it all and now have a garden railway.

There is a pic of a bus (rear view white): is that in Newborough Road? The one (front view red) is the same road or another , such as Acheson Road. Acheson Road would, in my view, not be ideal. An unfamiliar driver might turn right, by mistake, getting his vehicle wedged beneath the railway bridge.:redface:

Of the most well known BCT routes I guess would be the Outer Circle 11, Inner Circle 8 and Baldwins Lane and Kingstanding 29A, in that order.

Recently the mill was restored (again) and the pool was dredged last year!

Normally you can see Sarehole Mill over the gate on Cole Bank Road. It is still difficult to see it from Wake Green Road (trees and shrubs in the way). But there is a new wooden fence around the site! 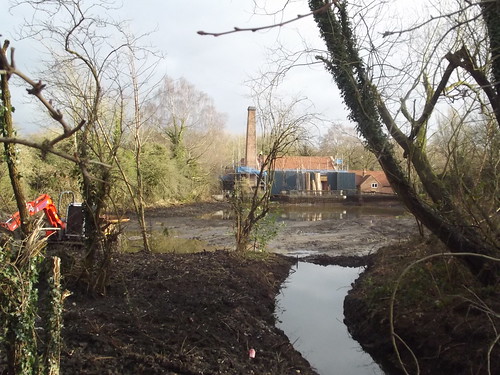 The same view last year during the Open Day (October 2013) 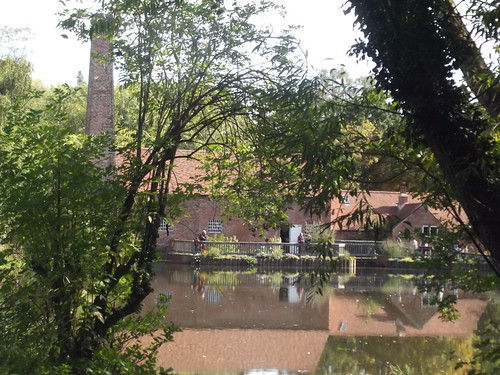 From the decking around the pool 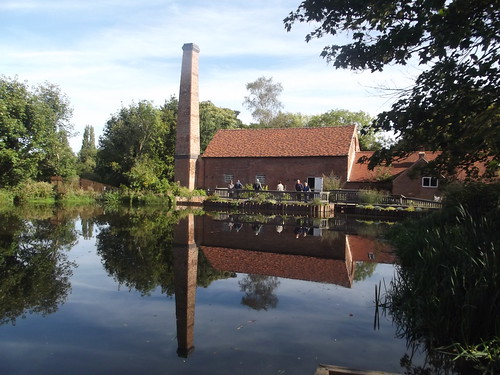 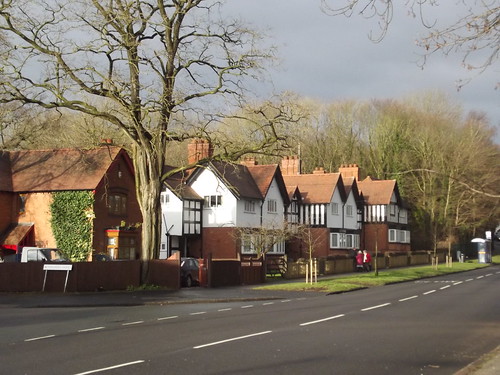 Don't think The Baldwin is listed. Therefore Hungry Horse could build an extension onto it! 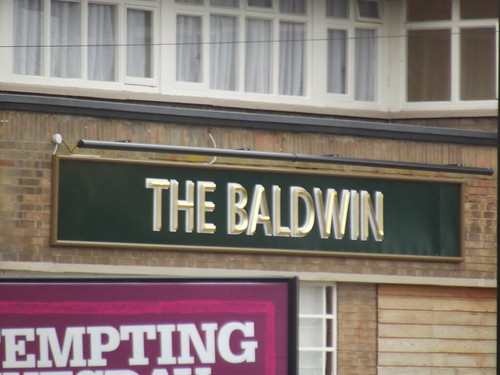 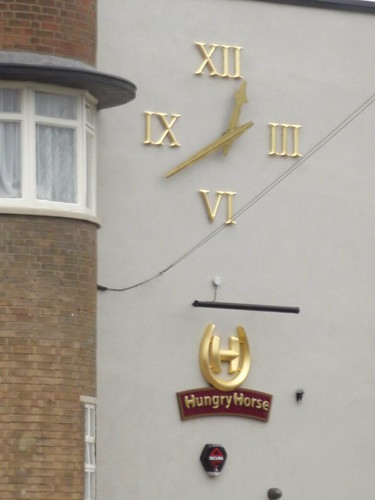 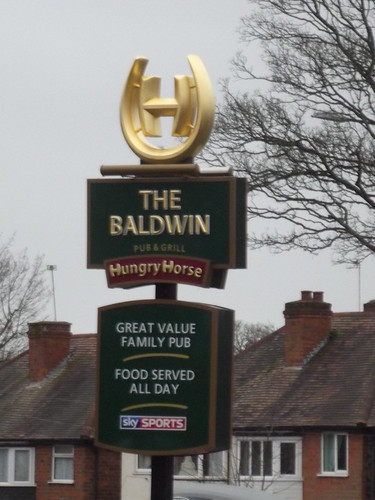 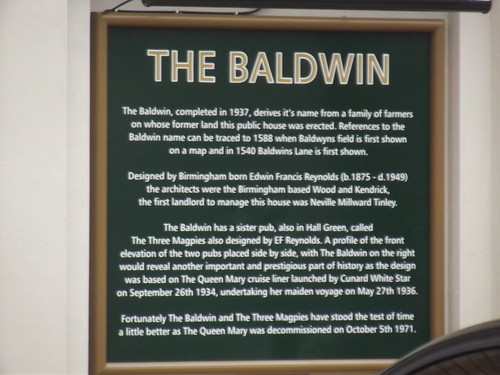 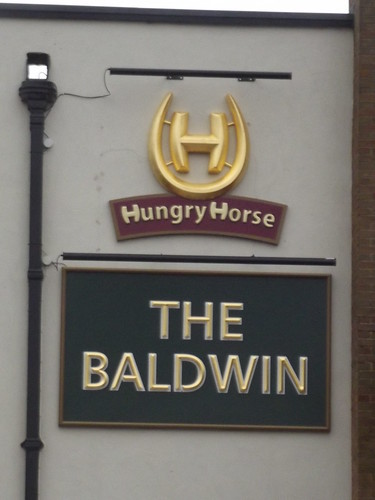 When I was 14yrs old I started working at Cannings and I would wait in line every morning on the Kingstanding Circle to get the 29 or 29A into town come rain or shine. I remember one time in the evening when we left work at 5pm. it was so foggy the buses weren't running and we had to walk all the way home to Kingstanding and you could hardly see a hand in front of you. It took me about one and a half hours to eventually make it to our front door.

Have a nice day, Wally.

Did anyone go all the way from Kingstanding or Pheasley to Hall Green? (and vice versa). Assume everyone got off in the city centre! No wonder the routes were eventually split into two!

dek carr said:
I remember the 29a at the Kingstanding end it went up and over Kettlehouse and down to the terminus at the Trees Pub on the Queslett Road.
Click to expand...

Later they moved the terminus onto the Pheasey Estate, at junction of Hillingford Av and Collingwood Drive

Last Friday I saw a broken down bus on Moor Street Queensway, that may go to Pheasey. 934 or 935. 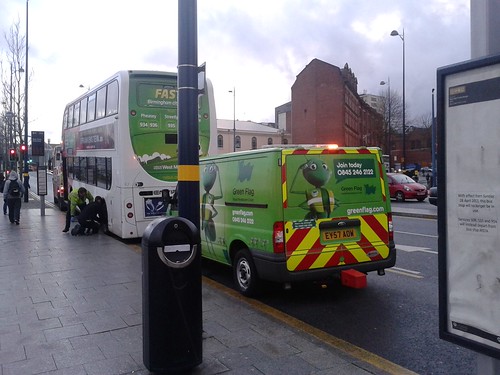 It probably also goes to Kingstanding! 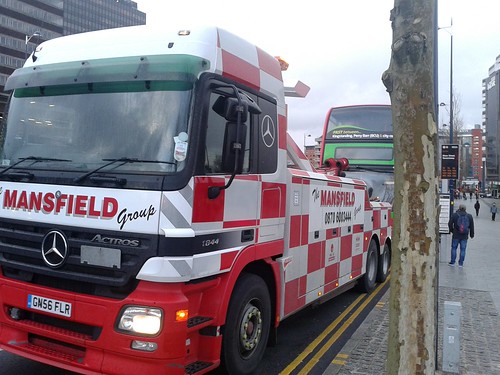 Theoretically you can change your bus at Moor Street Queensway, (one of the Stratford Road routes - get off at Carrs Lane or on near here). And change onto a Perry Barr bound bus! (and beyond).
You must log in or register to reply here.
Share:
Facebook Reddit Pinterest Tumblr WhatsApp Email Share Link
Top